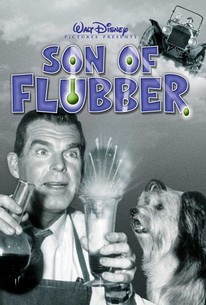 Son Of Flubber is the first big screen sequel attempted by Walt Disney productions. Professor Ned Brainard (Fred MacMurray) has come up with a new invention called "dry rain." A gun-like devise creates a rain cloud at the desired target. The one drawback is that the gun shatters every piece of glass in the immediate area. Brainard's faithful assistant Biff Hawk (Tommy Kirk) develops a by-product of flubber called flubbergas. Instead of the basketball team as in it's film predecessor, the football team is aided by the new invention to help them win the big game. The Professor faces the judge in court over the damage his dry rain gun leaves in the wake of it's use. The dark storm clouds of justice loom ominously over the inventor before a country agricultural agent produces giant vegetables that prove the value of the rain gun. Virtually the same cast appears in this film as appeared in "The Absent Minded Professor." The Disney sequel brought in over 9 million dollars in the initial release. It didn't take a college professor to prove the numbers added up quite well.

Mari Lynn
as Couple in Commercial

Belle Montrose
as Mother in Commercial

Critic Reviews for Son of Flubber

The goo still flew in this fun Disney sequel.

Audience Reviews for Son of Flubber

There's no sons in this film, but it's still a great sequel.

The original was better but still a funny early Ealingesq movie.