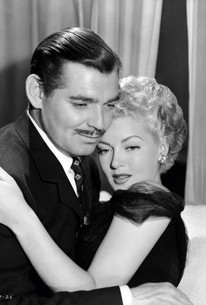 Unable to convince their isolationist New York editor (Charles Dingle) that America must be alerted to the threat of encroaching Nazism, pugnacious war correspondents Johnny and Kirk Davis (Clark Gable and Robert Sterling) are relieved of their European assignments. Back in the USA, Johnny inagurates a rogueish flirtation with Paula Lane (Lana Turner), an aspiring reporter who has harbored a long-standing crush on Johnny. Even so, Paula enters into a romantic relationship with Kirk, prompting Johnny to break up the affair-for Kirk's own good, of course. Paula's hopes for a lasting romance with Johnny are crushed when he refuses to discourage her from accepting an assignment in IndoChina. Later on, both Johnny and Kirk are sent off to cover the war in the Far East, where they are reunited with Paula, now busily shepherding Chinese war orphans to safety. The action moves to Bataan, where Kirk is killed in service of his country, leaving Johnny to write a passionate tribute to his brother-and, by extention, everyone else who has lain down his or her life for the cause of Democracy. During production of Somewhere I'll Find You, Clark Gable's actress-wife Carole Lombard was killed in a plane crash while participating in a war-loan drive; the impact of the tragedy is painfully obvious in Gable's performance, which becomes abruptly less playful and more somber in the final reels. New MGM recruits Van Johnson and Keenan Wynn make impressive appearances in uncredited roles. ~ Hal Erickson, Rovi

It's an absurd romantic war drama, but Gable and the much younger Lana create some buzz together.

There are no featured audience reviews yet. Click the link below to see what others say about Somewhere I'll Find You!