Sometimes a Great Notion (Never Give an Inch)1971 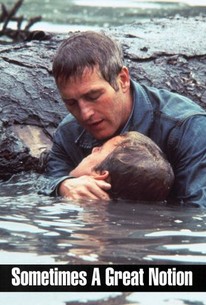 Sometimes a Great Notion (Never Give an Inch) Photos

Also known as Never Give an Inch, this film was based on a novel by Ken Kesey. Paul Newman (who also directed) stars as Hank Stamper, the oldest son of an Oregon logging family headed by Henry (Henry Fonda). Hank's half-brother, Leeland (Michael Sarrazin), embittered over Henry's treatment of his late mother, returns after a ten-year absence to work in the family business. Leeland's presence causes friction with Henry, who resents his prodigal son's hippie mindset, and Hank, who perceives Leeland as a threat to his own position in the family structure. Hank has good reason to feel resentful: before long, his wife, Viv (Lee Remick), has entered into an affair with Leeland. Meanwhile, Henry wages an ongoing battle with the unionized loggers in the region, who threaten reprisals should Henry attempt to continue his business without union help. ~ Hal Erickson, Rovi

Critic Reviews for Sometimes a Great Notion (Never Give an Inch)

It's not a classic, in the sense of being perfectly formed. But the craft work is one of a kind.

The result is rather good -- a sort of contemporary 'western' in the timber territory.

Newman's handling of the outdoor scenes, especially those involving work, is -- like his own acting -- restrained but powerfully evocative.

Newman starts tunneling under the material, coming up with all sorts of things we didn't quite expect, and along the way he proves himself as a director of sympathy and a sort of lyrical restraint.

Sometimes a Great Notion is a good somewhat compromised movie, that is justly famous for one of the greatest scenes in early seventies cinema.

Newman's security, both behind and in front of the camera, is overwhelming. [Full Review in Spanish]

Based on Ken Kesey's book, Newman's second film as helmer is not effective or cohesive as the first (Rachel Rachel), but Oregon locations and good acting by Henry Fonda and others compensate for uneasy fit between melodrama and action

When the film cuts away from the family soap opera dramatics and shows the macho men at work wielding their chainsaws at the logging camp among the giant trees, it has a buzz.

Kesey's 600-plus-page novel would have made a fine six-hour mini-series, and it's a tribute to scenarist Gay that he managed to condense that much material into under two hours.

Audience Reviews for Sometimes a Great Notion (Never Give an Inch)

Okay but overlong logging drama would have benefitted by being a half hour shorter. Has a fine cast, with Lee Remick giving the best performance even though her screen time is limited, but they don't have enough to work with. It just should have been more involving.

Sometimes a Great Notion (Never Give an Inch) Quotes