Something to Talk About1995 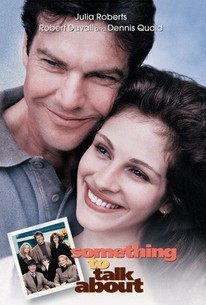 Critics Consensus: Small-town gossip and a battle of the sexes should really add up to more than Something to Talk About, especially with this much talent before the camera.

Critics Consensus: Small-town gossip and a battle of the sexes should really add up to more than Something to Talk About, especially with this much talent before the camera.

Critic Consensus: Small-town gossip and a battle of the sexes should really add up to more than Something to Talk About, especially with this much talent before the camera.

Something to Talk About Photos

The feminist outrage of Thelma & Louise (1991) screenwriter Callie Khouri blended superbly with director Lasse Hallstrom's predilection for stories about idiosyncratic families in this effective comedy-drama. Julia Roberts stars as Grace King Bichon, a prim small-town wife who is incensed when she learns that her husband Eddie Bichon (Dennis Quaid) is having an affair, and that it's not his first dalliance. Grace embarrasses her husband publicly -- then moves in with her wise-mouthed little sister Emma Rae (the scene-stealing Kyra Sedgwick). Grace becomes even angrier when her mother Georgia (Gena Rowlands) and wealthy father, horse breeder Wyly King (Robert Duvall), side with Eddie in the conflict, fearing the small-town gossip that's sure to swirl around their daughter's marital woes. However, when Georgia finds that Wyly has been a long-term philanderer as well, she kicks him out of his palatial home, embroiling the entire King family in a war between the sexes. Something to Talk About went through several title changes, variously being named "Game of Love" and "Grace Under Pressure" before producers settled on the title of the popular Bonnie Raitt song. ~ Karl Williams, Rovi

Critic Reviews for Something to Talk About

The humanity is spread around with a quirky, generous hand, reason enough to distinguish this quiet, low-tech comedy in a season of big-bang juvenilia.

Something to Talk About is at its best when Khouri's juicy script is adroitly mixing comedy and pathos.

Something to Talk About never goes bad, though it does get corny in places, and it hits a couple of dull patches near the finish.

Everything about Something to Talk About feels off by a few beats.

In [Khouri's] zeal to portray a world full of male scum, she creates a morally mismatched, pandering scenario.

Something to Talk About is weary -- every ounce of energy and originality has long since been wrung out of this formula, and the 'twist' of having the leads already married doesn't do much to spice up things.

A few stray moments of wit mired amidst a low-key and sleep-inducing presentation.

Horrible "romantic comedy." Great message for the ladies: Forgive your cheating husband because that's the best you can do.

Focuses on the personal renewal of a woman after the break-up of her marriage.

The script by Callie Khouri is somewhat disjointed in structure.

Audience Reviews for Something to Talk About

Quite a downer of a movie for a 90's Julia Roberts! It's not awful, and generally I like small town settings and I'm not someone who thinks movies need to be "nice" either, as that's not how life is. I don't know why I really couldn't take to this that much. The cast are good (well, aside from the daughter. Geez. I actually wondered if she was meant to be special needs in her earlier scenes, but , no, just bad acting it seems).

Adorable movie. Lots of good acting. The relationship between Roberts' and Sedgwick's characters reminded me of my sister and I's.

Clever and excellent characterisations elevate the familiar story of how Julia Roberts's life is thrown into turmoil when she discovers that husband Dennis Quaid has been cheating on her. Director Lasse Hallstrom did a good job with this drama movie. He certainly seemed fascinated in making a movie which shows how dysfunctional a family really can be, and on more than one level in this film. Roberts and Kyra Sedgwick are perfect choices of casting as sisters because they look like they could actually be related - imagine they are separated at birth.

Good cast. Movie about a woman who finds out her husband is cheating on her. She goes home to her parents to re-evaluate her life.

Something to Talk About Quotes