Some Guy Who Kills People2011 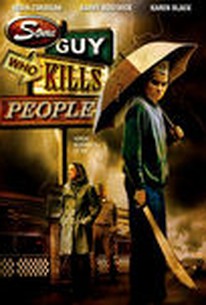 Some Guy Who Kills People Photos

At first glance, Ken Boyd may seem like an average comic enthusiast, living with his mother and working to make ends meet as an underpaid, underappreciated ice cream parlor attendant. But Ken has a dirty little secret: he fantasizes about killing people. After being released from a stay in the loony bin for severe mental trauma suffered when he was beaten and tortured by a gang of high school thugs, Ken's repressed anger suddenly reaches a boiling point. He begins to hunt down his tormentors, one by one, and exacts his bloody revenge - all the while forming an unconventional bond with his estranged 11-year old daughter.

Critic Reviews for Some Guy Who Kills People

It has a good cast, some funny lines and a tone that's more original than most.

In the sober light of day, the flaws here seem to glare and screech; under the right conditions, this is cheery genre fun.

Cutesy & slight, but also at times very funny, Some Guy Who Kills People sees its director advancing in leaps & bounds from his previous feature Mega Shark vs Giant Octopus, while scaling monstrous mayhem and murder back down to a very human level.

Antagonists are entertainingly offed, but the violence is all too cartoonish to ever feel relevant. Furthermore, dramatic moments are often clumsily handled.

An amiable little indie flick with some memorable cameos and a few splatters of graphic gore thrown in for good measure.

It's a slasher you can take your mum to.

SGWKP is a slow but absorbing character study reminiscent of genre mash-ups like Baghead, Lars & The Real Girl, and Innkeepers. At its severed, bleeding and butchered heart, SGWKP is actually a relationship drama.

Audience Reviews for Some Guy Who Kills People

Not quite as quirky and funny as I had hoped. Not really horror either, more like a drama with a bit of gore.

Kind of endearing. Wasn't quite as quirky, and funny, as I expected it to be. I expected to find a gem here due to the really good reviews. I was a little disappointed. This was just average in my book...

Brilliant ! Didn't expect this to keep my attention, but I enjoyed every moment. Great acting!!

Some Guy Who Kills People Quotes