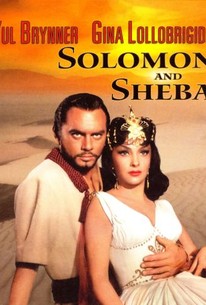 Romance, treachery, intrigue and spiritual awakenings abound in the Biblical film adaptation of Solomon and Sheba. Trouble begins between two brothers when poet Solomon (Yul Brynner) is chosen to be next in line to the throne by King David of Israel. His warrior brother Adonijah (George Sanders) is livid when Solomon becomes king. While Israel prospers under Solomon, Sheba (Gina Lollobrigida) conspires with the Egyptians to topple Israel. She is ambitious and seductive and finally gets Solomon to fall in love with her. When a pagan dance ritual turns into an orgy, the people turn against Solomon when the Temple of Jehovah is struck by lightning. After the righteous Solomon has fallen from the grace of God, Sheba renounces her pagan Gods and converts to Judaism. A cast of thousands depict the raging battle between the Israelites and the Egyptians. Directed by King Vidor at the cost of five million dollars, production was delayed when the original choice for the role of Solomon (Tyrone Power) died during the making of the film. Many scenes had to be redone with his replacement, Yul Brynner.

Critic Reviews for Solomon and Sheba

This multi-million-dollar semi-biblical extravaganza is one hour shorter than Ben-Hur, but it seems to take at least twice as long to sit through.

The movie not only lacks attractive qualities but it is beneath other pseudo-biblical pastiches. [Full Review in Spanish]

It is highbrow nowadays to enjoy this sort of low- browedness, and not admit to too many yawns; all the same, after the first hour or so, I couldn't stop thinking of all the useful and pleasant things I might be doing if I was only outside the cinema.

If Ben-Hur was The Avengers of its decade, then Solomon and Sheba was the Fantastic Four of its time, an expensive undertaking that earned sizable bank without being especially good.

Audience Reviews for Solomon and Sheba