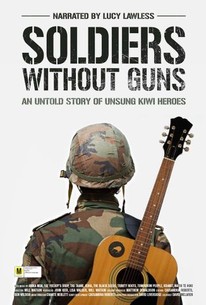 A David and Goliath story of a Pacific Island people rising up against the largest mining corporation in the world. 10 years of war saw 14 failed peace agreements. In 1997 the NZ army stepped into the conflict with a radical new plan. Instead to taking guns into the war-zone, unarmed soldiers took guitars. This idea was condemned by the national and international media - no-one thought it could work. We follow the riveting journey of the peacekeepers as they endeavored to use Music, Maori culture and Aroha to end the worst civil war in the Pacific's history.This film shines a light on the untold story of unsung heroes. A story all New Zealanders can and will be proud to call their own.

Critic Reviews for Soldiers Without Guns

Soldiers Without Guns made me prouder to live in this country than any film in recent memory. Go see it.

Audience Reviews for Soldiers Without Guns

There are no featured audience reviews yet. Click the link below to see what others say about Soldiers Without Guns!