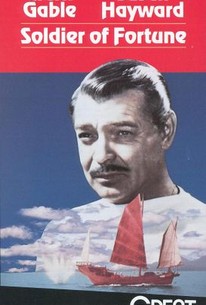 The first of two Clark Gable films produced by 20th Century-Fox, Soldier of Fortune casts Gable as an American mercenary, running a successful smuggling operation in and out of Hong Kong. Gable is hired by Susan Hayward, who hopes to locate her missing husband, photographer Gene Barry. Upon discovering that Barry is being held by the Communists somewhere on the Chinese mainland, Gable risks his neck to rescue the man. Along the way, he falls in love with Hayward, which may or may not compromise his dedication to saving Barry's neck. Filmed largely on location, Soldier of Fortune deserves to be seen in its original CinemaScope form--or, at the very least, in the "letterboxed" version recently made available to cable television.

Mel Welles
as Rocha
View All

Critic Reviews for Soldier of Fortune

Our fallen man has redeemed himself as a red-blooded Commie hating American.

Audience Reviews for Soldier of Fortune

There are no featured audience reviews yet. Click the link below to see what others say about Soldier of Fortune!