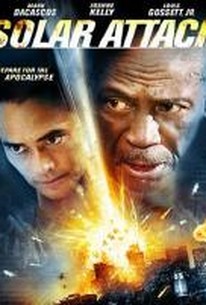 The largest coronal mass emission ever detected is about to set the entire planet ablaze, and in order to save the human race, scientists will be forced to take the ultimate risk in this apocalyptic thriller starring Mark Dacascos and Louis Gossett Jr. An incendiary segment of the sun has broken off, and now it's hurdling directly toward planet Earth. Now, in order to save humankind from certain destruction, the world's scientists will take the bold step of exploding the polar icecaps. Even if their plan succeeds, life on Earth will be drastically different than ever before, and millions are likely to perish.

Louis Gossett Jr.
as President of the US

Even playing the president, Lou Gossett looks embarrassed to be appearing in this type of cable network filler.

There are no featured audience reviews yet. Click the link below to see what others say about Solar Attack!