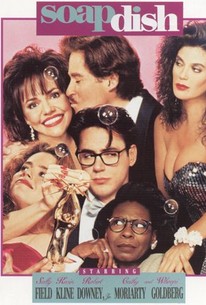 Critics Consensus: Soapdish may not be as addictive as the serialized dramas it's spoofing, but a talented cast helps make this affectionate sendup feel fresh.

Critics Consensus: Soapdish may not be as addictive as the serialized dramas it's spoofing, but a talented cast helps make this affectionate sendup feel fresh.

Critic Consensus: Soapdish may not be as addictive as the serialized dramas it's spoofing, but a talented cast helps make this affectionate sendup feel fresh.

In the comedic farce Soapdish, the behind-the-scenes lives of several soap opera actors are just as melodramatic as those of their television counterparts. Sally Field stars as Celeste Talbert, the star of a declining TV show. To make matters worse, Talbert's career is thrown into turmoil when her rival, Montana Moorehead (Cathy Moriarty), tries to persuade producer David Barnes (Robert Downey Jr.) to write Talbert off the show. Smitten by Moorehead, Barnes comes up with a scheme to get Talbert off the show by hiring her niece Lori (Elisabeth Shue) and then Jeffrey (Kevin Kline), an old flame and cast member who was written out of the show 20 years prior. Soon, mayhem rules on the set as the cast and crew tangle, culminating in a special episode, broadcast live.

Leeza Gibbons
as Herself

John Tesh
as Himself

Stephen Nichols
as Himself

Finola Hughes
as Actress
View All

Soapdish aims at a satiric target as big as a Macy's float and intermittently hits it.

This movie certainly has its dopey moments, but if you're feeling indulgent you're likely to have a good time with it.

Nothing succeeds like excess, this comedy would have us believe.

It's a kick to see Field sending up her sweetheart image.

Soapdish is pure joy, a lemon-fresh spoof of daytime drama that does the dishing and may even soften your hands.

Soapdish is a flurry of activity without a dedicated core, neutering displays of slapstick and the force of the satiric crescent kick.

Fundamentally, its subject for satire isn't all that clever.

Not as funny as the real thing and unlikely to be anywhere near as successful as the leading real-life exponents of the art.

A funny, sharply-written film more pertinent in the Noughties than it was upon its first release.

Way too hard-working for comedy.

The show within a show concept is the thing here with the question being: isn't the business of making a show more interesting than the show itself? Played, as daytime television frequently does, larger than life ... the result is the guilty pleasure of this film. Fields and Kline are marvelous.

Soapdish is one of my guilt pleasures...such a funny movie with such good actors such as: Sally Field, Whoopie Goldberg, Elizabeth Shue, Robert Downey Jr, Cathy Moriarty, Kevin Kline, and Teri Hatcher. This movie directed by Michael Hoffman shows you what happens behind closed doors on a soap opera....apparently another drama ensues...too funny!

Mildly amusing spoof of daytime soap operas with an amiable cast. But the laughable soap opera scenes are far funnier than the behind the scenes antics, and the similar Tootsie is better.