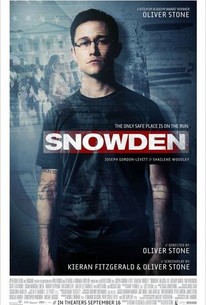 Critics Consensus: Snowden boasts a thrilling fact-based tale and a solid lead performance from Joseph Gordon-Levitt, even if director Oliver Stone saps the story of some of its impact by playing it safe.

Critics Consensus: Snowden boasts a thrilling fact-based tale and a solid lead performance from Joseph Gordon-Levitt, even if director Oliver Stone saps the story of some of its impact by playing it safe.

Critic Consensus: Snowden boasts a thrilling fact-based tale and a solid lead performance from Joseph Gordon-Levitt, even if director Oliver Stone saps the story of some of its impact by playing it safe.

Academy Award (R)-winning director Oliver Stone, who brought Platoon, Born on the Fourth of July, Wall Street and JFK to the big screen, tackles the most important and fascinating true story of the 21st century. Snowden, the politically-charged, pulse-pounding thriller starring Joseph Gordon-Levitt and Shailene Woodley, reveals the incredible untold personal story of Edward Snowden, the polarizing figure who exposed shocking illegal surveillance activities by the NSA and became one of the most wanted men in the world. He is considered a hero by some, and a traitor by others. No matter which you believe, the epic story of why he did it, who he left behind, and how he pulled it off makes for one of the most compelling films of the year.

On DVD This Week: Snowden, American Honey, The Dressmaker, and More
The Santa Clause, Misery, and More Available to Stream on Netflix and Amazon Prime
Box Office: Sully Repeats

Yet although Gordon-Levitt presence helps to keep us invested in the story, you'll be left wondering how this dull, overlong film might have turned out in the hands of a less bombastic filmmaker.

Stone's film is about as suspenseful as a trip to Ikea.

It's a forthright attempt to engage with this fascinating, opaque figure and show what it cost him personally.

Clearly Stone wanted to tell it like it was with Snowden, and unfortunately that has already been done better in the tense, minute-by-minute fly-on-the-wall documentary Citizenfour.

Juicy angles are set aside in favour of a straightforward, unquestioning biopic of a dull man who very publicly quit his job.

Partiality is the heel in this Achilles film; though to this Achilles film's credit, it also outruns, as storytelling, the tortoise forebodings we might have had about a true-life plot so cerebral and cyber-centric.

Stone is the first to offer a political drama, with measured suspense and the echoes of documentary for which he is recognized for, to portray the most relevant event in recent decades. [Full review in Spanish]

Snowden does a much better job than Oscar-winning documentary Citizenfour filling in the audience on the programmer's trajectory and his motivations.

Snowden, while not the unmitigated disaster Alexander was, doesn't quite qualify as a return to form.

Snowden is a plodding, pedantic exercise in how not to approach culturally compelling material, featuring one of the most laughable lead performances in an alleged prestige picture.

Snowden is a missed opportunity, a subject that might have been better in the hands of a different director, regardless of Stone's considerable talent.

Cate Marquis
We Are Movie Geeks
View All Critic Reviews (256)

Despite some cliches and not being provocative enough for an Oliver Stone movie, this is a solid companion piece to Citizenfour with a great cinematography and editing - and Gordon-Levitt does an impressive job mimicking the real Snowden's body language and even voice.

Snowden is a competently made biopic that addresses immediate issues in today's world. Edward Snowden. Some may view him as a criminal for breaking the law and leaking secure information from the NSA, however the film took a more patriotic approach and portrayed him as a hero for revealing this information to the world. It's a very tricky subject. Did he have any right to go against his government and be considered a traitor? Perhaps, if it meant that the public knew that they were being spied on. Privacy is such an integral part of our interconnected lives, so my views may suggest that I agree with Snowden's actions...but as a self-proclaimed critic I shall remain unbiased. As a film, I thought Snowden was actually pretty well executed. Oliver Stone did a great job at balancing Edward's private life with his career which definitely made him more relatable as a character. I really appreciated the technical jargon, as a computer programmer I understood it all and felt like saying "Yes! I could easily become a hacker!". Alas, writing code in film is much easier than in reality...so my genius thoughts were shot down immediately. What really took me by surprise was the cast. ALOT of big names here that I wasn't expecting to see. Joseph Gordon-Levitt was perfect casting, took me a while to tune into his voice imitation of Snowden but I thought he was excellent. Rhys Ifans, Tom Wilkinson, Melissa Leo, Timothy Olyphant, Shailene Woodley (who's chemistry with Gordon-Levitt was slightly underdeveloped) and the one...the only...Nicolas Cage. Yes, stop what you are doing and gasp in revelatory excitement...Cagey boy, is in a good film. I thought the dramatic moments were tense, the plot was educational...all the elements for perfection were there. I just felt the structure was too basic and familiar. Nothing extraordinarily groundbreaking. It's a functional biopic and it succeeds in what it sets out to do. I couldn't help but think this was similar to The Fifth Estate...just better. Overall, an enjoyable basic biopic that addresses an important issue.

It is films like this that make me question whether or not I ended up loving it or hating it. When the documentary Citizenfour was released a couple of years ago, the Academy Awards ate it up. This story was definitely ripe for the film treatment, as its core story is gripping and revealing. Did it necessarily have to go beyond its documentary, getting a full narrative feature film? I would say no, but I can't complain with what the finished product is. Snowden may not be one of director Oliver Stone's best, but this is why I believe critics are hitting this film a little harder than it deserves. Following Edward Snowden after he has been hired at the NSA, the film explores his exposure of the NSA's secrets, including the effect that spying through someones computer or cell phone can truly have. Having seen the documentary Citizenfour, I went into this film fairly familiar with the events and the overall outcome of the story at hand. Joseph Gordon-Levitt does a fantastic job disguising his voice and transforming into Edward Snowden. Of all the actors working in Hollywood today, I do not believe a better one could have been picked, as far as appearance and performance go. While portions of this film feel slightly over-the-top compared to what happened in reality, I can confidently say that the overall message was spot-on and some of the moments from the documentary are repeated verbatim. For that reason, the accuracy of this film is definitely present. Not knowing that this film would spend so much time focussing on the relationship of Edward and his girlfriend Lindsay (Shailene Woodley), I was pleasantly surprised to see such great chemistry from these two unlikely performances. Never in my life would I have considered pairing these two up as a couple, but I could not have been more wrong. Their relationship is believable to no end and they really sell the fact that secrets can truly tear a couple apart. Although the core story of exposing the NSA is extremely compelling, I almost found their relationship topping that aspect in the end. Terrific work from these two. Given almost the same running time as Citizenfour and having the use of non-linear storytelling, jumping back and forth through time, you'd think that the pacing and energy would be the highlight of the film. Sadly, this is where I feel the film lacks, heavily. I actually loved watching this film at times, given the terrific performances all around and a story that is worth exploring, but it is without question that the film feels about 20-30 minutes too long. Right when you think the film is about to kick into gear and start moving faster, it flashes back to a moment from the past where two character talk for extensive periods of time. Yes, as I stated, the performances are great and the material is worth watching, but there is only so many flashbacks and long stretches of dialogue that an audience member can take. That being said, this is still a very well-made film. In the end, Snowden benefits from an extremely talented cast, lead by a director who gives it his all. Yes, Oliver Stone has had his share of ups and downs over the last decade or so, but I believe Snowden is a step in the right direction for him. With this engaging true story and a beautiful score from beginning to end, you flow with the story as if this actually was a documentary. There are quite a few scripting issues and it is definitely overlong, but there is a whole lot more engaging elements than boring ones. In the end, Snowden is not as great as it could have been, but it is definitely worth checking out.