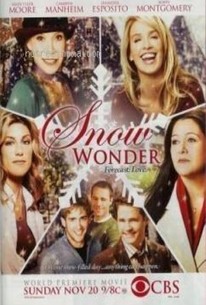 In the tradition of such omnibus films as Tales of Manhattan and Flesh and Fantasy, the made-for-TV Snow Wonder features five separate stories, tenuously linked together by a single plot strand -- in this case, a freak Christmas Eve snowstorm that has blanketed the world, striking even in such traditionally snow-free areas as Malaysia and Hawaii. While Madagascar-based meteorologist Billy (Josh Randall) tries to make sense of the phenomenon, his lovely assistant, Joey (Michelle Krusiec), muses philosophically "Snow can change people's lives." How right she is. As the film progresses, we are whisked off to Kentucky, where lovelorn bridesmaid Paula (Poppy Montgomery) watches in mute astonishment as her best friend's wedding crashes and burns as a result of the sudden blizzard; to New Mexico, where recently widowed Bev (Camryn Manheim) has retreated in hopes of overcoming the bitterness attending the death of her husband exactly one year before; to New York, where young Luke (Eric Szmanda), an aspiring writer whose parents seem to take great delight in discouraging him, receives a surfeit of inspiration from his freewheeling aunt Lila (Mary Tyler Moore); and to Baltimore, where philandering husband Warren (Jason Priestley), who has prepared the "perfect alibi" with which to hoodwink his loving wife, is helplessly snowbound with his current mistress. By film's end, the good have been rewarded, the bad have been punished, and something special develops between Billy and Joey...suggesting that this is no ordinary "random" snowstorm. Based on Connie Willis' short story Just Like the Ones We Used to Know, Snow Wonder made its CBS debut on November 20, 2005.

There are no critic reviews yet for Snow Wonder. Keep checking Rotten Tomatoes for updates!

There are no featured reviews for Snow Wonder at this time.