Snow White: The Fairest of Them All2002 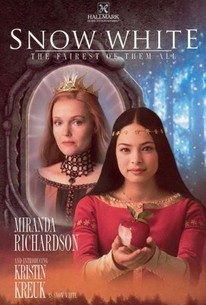 Snow White: The Fairest of Them All Photos

One of the Brothers Grimm's best-loved fairy tales gets a lavish new presentation in this made-for-TV fantasy. John (Tom Irwin) and Josephine (Vera Farmiga) are a poor but good-hearted peasant couple who are blessed with a child relatively late in life. Sadly, Josephine died while giving birth to her daughter and John struggles to raise the child on his own. While foraging for food during an especially hard winter, John breaks down and cries, and his tears inadvertently thaw out a mystical creature who was frozen in ice, the Green-Eyed One (Clancy Brown). The Green-Eyed One expresses his gratitude by offering John three wishes and John asks that his daughter never know hunger, that he have a kingdom in which to raise her, and a queen at his side to help her grow to adulthood. The Green-Eyed One complies, but it turns out there's a catch: John becomes king, but his queen is Elspeth (Miranda Richardson), a power-hungry shrew with no love for her new stepdaughter. As John's daughter Snow White (Kristin Kruek) grows to become a beautiful young woman, Elspeth's hatred of her grows and grows, and in time Snow finds herself banished from the kingdom by her stepmother. Snow, however, is befriended by a group of magical little men, each of whom is named for a day of the week.

Clancy Brown
as The Grandfather of Wishes

Rob Roy
as Minister No.1

Peter Hall
as Minister No.2

Michelle Harrison
as Lady in Waiting No.1

Michelle Martineau
as Lady in Waiting No.2

Stacee Copeland
as Lady in Waiting No.3

Lauren Kennedy
as Child No.1

Naomi Lawson-Baird
as Child No.2

Janelle Rancourt
as Girl on Road
View All

Critic Reviews for Snow White: The Fairest of Them All

The movie is a technical marvel with skillful but gruesome makeup and costumes from Norma Hill Patton, Gitte Axen and Nancy Bryant, respectively.

Thompson's directorial vision definitely takes a cue from Tim Burton, but with a more universal sweetness.

Audience Reviews for Snow White: The Fairest of Them All

it was great, loved it, Miranda Richardson was great in it

Faded tiny bit away from the tale but I think Kristin Kreuk was the very best choice as Snow White.

An extremely bizarre, yet still very imaginative and entertaining adaptation of the classic tale. The casting is a nice bonus as well.

Snow White: The Fairest of Them All Quotes