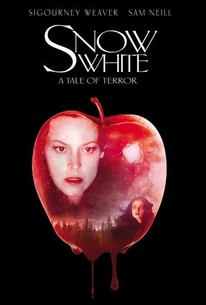 Once upon a time, pursuing wolves frighten horses drawing a carriage, and it tumbles down a hill. Dying, the pregnant woman inside orders her grieving husband Frederick (Sam Neill) to cut the baby from her womb, so that at least it might live. Years later, the infant is now headstrong young Lilli (Taryn Davis), who is resentful of her father's upcoming marriage to Claudia (Sigourney Weaver). Claudia is devoted to the memory of her own mother and installs a magic mirror that belonged to her in a wardrobe in her private room. More time passes; Lilli is now an adult, but her relationship with the now-pregnant Claudia has never improved, though Claudia has never done her any ill. Claudia loses her baby, and on the same night, gazes into her mother's mirror, which shows her an image of herself young and beautiful. She determines to rid herself of Lilli. Lilli is walking near the forest when Claudia's mute brother Gustav (Miroslav Taborski) draws a knife and chases the frightened young woman into the forest. She evades him, so he kills a pig and takes the heart to a delighted Claudia, who believes it to be Lilli's heart. She has Gustav put the heart in a stew cooking in the kitchen, and that night as she dines with Frederick, Lilli eats the stew with great pleasure. Later, Frederick and some men search for Lilli in the rainy forest. Lilli takes refuge from wolves in a ruined castle, where she's confronted by seven vagabonds who've banned together to seek a lost gold mind. Will (Gil Bellows), scarred during the Crusades, is around Lilli's own age and resents her presence, but the older Lars (Brian Glover) is friendlier to her. The mirror tells Claudia that Lilli is still alive, so in the forest where Claudia keeps a shrine to her dead baby, she casts a spell designed to kill her stepdaughter. Lilli, helping the men in their mine, is almost smothered in a cave-in; she's rescued, but one of the men dies. The mirror again tells Claudia that Lilli still lives. Whirling in a black gown, Claudia conjures a wind that strikes the forest; giant trees topple all around Lilli and the men, killing Lars, but Lilli still lives. So the mirror now transforms Claudia into a bald old hag, and she goes into the forest herself. She offers an apple to Lilli, who takes one bite and falls into a trance that no one can tell from death. She's placed in a stained-glass coffin and lowered into the ground, but the agonized Will, who's fallen in love with her, lifts her from the coffin and a piece of apple falls from her mouth. She returns to life, and they all head for the castle. She arrives in time to interrupt Claudia in the act of slashing Frederick's throat, then confronts Lilli in a room full of mirrors. (There's a hint that Claudia had a part in the death of Lilli's mother.) Lilli stabs not Claudia but her mirror image. It bursts apart, shredding and burning Claudia to death. This bold movie out-grims the Brothers Grimm, telling their oft-told tale as a horror movie/adventure -- and it works. In fact, the weakness of the movie is precisely that the story is so familiar, but the changes wrought by the writers and director keep it fresh for most of its length. It's handsomely designed, using real locations and costumes that are never too grand for the setting. Weaver is clearly having a great time as the not-so-wicked stepmother who eventually becomes a vengeful witch. Especially for a fairy tale, the characters are complex and not necessarily always likable; even Lilli (who is never called "Snow White") has a hard edge, and her "Prince Charming" is a bitter, scarred commoner. It's a shame this attractive, imaginative film didn't have any theatrical release in the United States; originality, especially in a field as well-ploughed as fairy tales, should be encouraged. ~ Bill Warren, Rovi

Gil Bellows
as Will

Joanna Roth
as Lilliana
View All

Critic Reviews for Snow White: A Tale of Terror

It's an unappealing dark adult version of the classic Grimm Brothers' fairy tale of the Snow White story.

Too dark for it's own good...the fairytale's been sucked clean-dry

Not bad dark retelling of the classic tale.

The frenzied atmosphere of darkness may be a little off-putting for some, but it only helps to invigorate the well-worn tale with new energy.

It's a dark and intense movie, filled with physical and emotional pain.

[W]hat was intended as dark gothic horror just comes off as something out a Renaissance Festival gone horribly wrong.

Audience Reviews for Snow White: A Tale of Terror

Interesting version of Snow White. Not quite a horror movie, it does have some of those elements, bringing the story much closer to how the Brothers Grimm told it than the cleaned up version that we're more familiar with. Sigourney was fantastic as the wicked Queen. Definitely not a Disney film.

The Creepy version of Snow White!

If Nursery Rhymes were derived from certain events in history, why cant fairytales be glossied up stories of certain people from the past?

The fairy tale is over.
The Grim Brothers rewrites the classic childrens story into a more realistic, dark and horrifying life story of a young girl from a prestigious family.

Set in medieval Europe, the story starts off in the middle of winter while the Hoffmans are travelling home. Lady Lilliana Hoffman is with child and is weary from their previous engagement. As their carriage passes by the woods, the group is spotted by a pack of hungry wolves...

Sam Neil, Sigourney Weaver and Gil Bellows (Billy, from Ally McBeal) takes the house down with their great performance in this 1997 TV movie. I thought one of the seven 'dwarfs' looked like Chris Benoit, which was interesting and "personally funny" at the same time.

There were parts in the movie that I thought I was watching a theater play, and Monica Keena reminded me of Frodo in a dress... but then again I also hated Kristin Kreuk in "The Fairest of them All", so maybe its just me reacting to the chosen pretty one.

A dark, delectible syrup. An interesting story and an outstanding performance by Sigourney Weaver. Loved the shocking twists.

Extra extra! Read all about it!
"Weaver's critically-acclaimed performance earned her an Emmy Award-nomination as well as a Screen Actors Guild-nomination as Outstanding Lead Actress in a TV Movie.
The film also earned two Emmy nominations for Makeup and Costume Design."
Easter egg: Ever thought about how some people degrade others? Think about what yould call someone who yould find lowly.

Returning to the Brothers Grimm no doubt was intended to remove the cloying taint of Disney and other sanitised adaptations, but this rendition of the wholesome young woman and her evil stepmother trades cute forest creatures and cheerful dwarfs for pointless gore and ill-conceived characters.