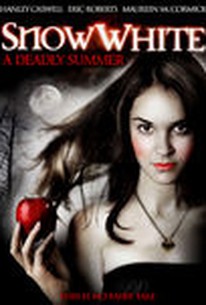 Eric Roberts and Maureen McCormick star in cult director David DeCoteau's update of the Snow White fairy tale. Her mother no longer in the picture, strong-willed teen Snow (Shanley Caswell) is devastated when her father (Roberts) announces that he has gotten engaged to the stern Linda (McCormick), who quickly gets her step-daughter out of the picture by enrolling her in a boot camp for wayward adolescents. From the moment Snow gets to the camp, she senses that something is amiss. And she couldn't be more right; years ago, following a vicious murder, the camper suspected of committing the crime vanished into the surrounding woods. To this day, she has never been found. Later, when the campers begin dying in droves, Snow suspects that the killer is watching them from the trees, always awaiting the perfect moment to strike. Only when all of the other campers have been slaughtered and Snow discovers the killer's true identity will she find the courage to fight back with a vengeance, or risk losing the only family she has left.

If I didn't know the director was responsible for dozens of movies like this one, I'd have thought this was made by high school kids when they didn't want to take shop class.

An absolute abomination. Shot like a porno with all the sex removed. It got off to a bad start as once shot of a staircase started to drift off to the side as though the camera man had nodded off for a split second. This film tries to do a little modern day twist on Snow White, with a 'troubled' young girl sent off to camp by her wicked stepmother. She is soon having hallucinations and murders take place. The epic scale of the awfulness is worth the two stars as it did entertain. Watch Eric "I was in The Dark Knight 4 years ago" Roberts try and hide his shame. I'm pretty sure he agreed to be in the film but wasn't paid to act. Like hiring a hooker to wait tables. "You can have my face and my name, but the acting will be a little extra". The director decided not to take him up on this offer. Maureen McCormick of Brady Bunch fame is the evil stepmother who appears to have taken some Giblin Formula as she talks to herself in mirrors. All the nighttime scenes are actually shot during the day which leaves them looking bright and blue. The costumes involve black T-shirts and jeans, which the script tries to pass off as the camp uniform, but when the sheriff arrives with nothing to set him apart other than a plastic badge clipped to his belt, you realise that the actors are probably supplying their own clothes. Heck, the casting call probably stated as much. The film drags itself to feature length, with an end that makes such little sense it was like the punchline to a huge practical joke. Brilliantly awful and should be enjoyed with many beers and a few close friends.