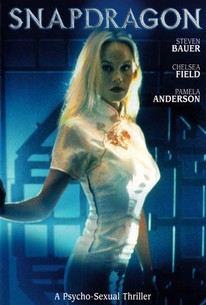 This erotic psychological thriller marks the feature film debut of popular actress Pamela Anderson in a leading role. After two johns were murdered while having sex with a prostitute, Sergeant Peg Peckham (Chelsea Field) is transferred from the vice squad to homicide and assigned to investigate. Peg's determined to catch the killer, who could be a female serial killer, and asks her police psychologist boyfriend David Stratton (Steven Bauer) for a profile. In the meantime, David has become attracted to a new patient, Felicity (Anderson), an amnesia sufferer who is having violent recurring dreams in which she murders her lovers. Although the connection to Peg's case seems obvious, Felicity doesn't fit the psychological profile, and her bombshell beauty is having an intoxicating effect on David. Snapdragon (1993) was co-written by actress Terri Treas of the Alien Nation TV series and telefilms.

There are no critic reviews yet for Snapdragon. Keep checking Rotten Tomatoes for updates!

There are no featured audience reviews yet. Click the link below to see what others say about Snapdragon!