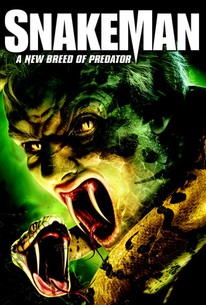 A powerful pharmaceutical company sends a team of top scientists into the remote jungles of the Amazon to discover the secret of eternal youth, only to instead find them encountering the prospect of immediate death in a quest through the green inferno that finds mankind facing his ultimate fear. Archeologists have uncovered the perfectly preserved corpse of an ancient warrior who lived to the age of 300, and when word of the discovery reaches the higher-ups at pharmaceutical giant Gentech, they believe they have finally found they key to ultimate longevity. A previously undiscovered tribe has been located near the sight where the ancient warrior was unearthed, and they may just hold the secret of eternal youth. When helicopter carrying the scientists is forced to crash land in a violent storm, their journey into the jungle finds them pitted against a slithering horror more terrifying than anything man-made monster.

There are no critic reviews yet for Snake King. Keep checking Rotten Tomatoes for updates!

I wonder if the Director was on Crack when they came on the Idea to make this Movie? Seriously!