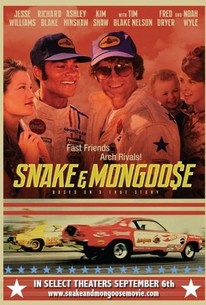 In nature, the snake and mongoose are the deadliest of enemies-genetically encoded to eternally fight to the death without mercy. Beginning in the 1960's, the nature of that dynamic was strategically and expertly applied to the historic rivalry between Don Prudhomme and Tom McEwen in the most unlikely of venues-a "minor" sport struggling for attention on dusty drag-racing strips at tracks across the country. There, Prudhomme, the Snake, and McEwen, the Mongoo$e, did, in fact, compete aggressively for dominance in the nascent sport of drag racing. Racing aficionados probably know that much of the story by now. But, what if that rivalry spawned something more than victories and defeats? What if it created a unique and unlikely friendship out of the smoke of battle? What if Snake and Mongoo$e were quietly the closest of friends even as their rivalry intensified? What if they shared the joy and pain of life when they were not busy competing? What if their mutual respect, racing nerve, thirst for fame and compensation, and their desire to advance their thrilling, but extremely dangerous, sport brought them together as something more than mere rivals? What if a perfect storm of conditions transformed their competition into something greater-a blood kinship that enabled them to team up in order to revolutionize an entire industry? (c) Official Site

Maxwell Perry Cotton
as Jamie (at 11)

Mason Welch
as Jamie (at 5)

Mason Cotton
as Tommy (at 7)

Hot rod fans will race to this sports bio-drama drenched in period authenticity.

This chintzy, awkward dramatization of a real-life racing rivalry is a real drag.

A flawed but essential film for its target audience.

Snake & Mongoo$e is a lovely little gem of a film, though, like all gems, it's not flawless.

There are no featured audience reviews yet. Click the link below to see what others say about Snake & Mongoo$e!