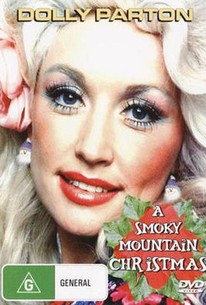 Smoky Mountain Christmas is the sort of fare that always seems to pop up exclusively during the Yuletide season: an original made-for-TV musical fantasy. Dolly Parton plays a country-music star (imaginative casting, this) who finds herself stranded in the Tennessee backwoods with taciturn mountaineer Lee Majors. Parton also touches base with seven orphaned young'uns...and a witch (Anita Morris). John Ritter makes an uncredited cameo appearance as the judge who presides over the inevitable climactic adoption proceedings. First broadcast December 14, 1986 (directly opposite the ratings-grabbing The Promise), A Smoky Mountain Christmas was directed "con brio" by Henry Winkler.

Linda Hoy
as Hatty
View All

There are no critic reviews yet for A Smoky Mountain Christmas. Keep checking Rotten Tomatoes for updates!

There are no featured audience reviews yet. Click the link below to see what others say about A Smoky Mountain Christmas!