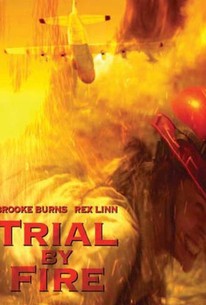 Unfairly blamed for the death of her captain, a female firefighter attempts to restore her reputation by joining one of the most elite firefighting groups in the country. Kristin Scott (Brooke Burns) was following in her father's footsteps when she decided to join the fire department, though her career battling blazes nearly came to an end when her captain perished in a fire and she was forced to shoulder the blame. But Kristin isn't one to shrink in the face of adversity, and in the aftermath of that tragedy she has made it her mission to become the first female ever to be accepted into the elite ranks of the Missoula Smokejumpers. The most treacherous form of fire fighting, smoke jumping involves jumping out of planes in order to combat wildfires and save lives. Though no woman before her has ever been accepted into the hallowed ranks of the Missoula Smokejumpers, Kristin begins her grueling, four week training program with steely determination. Later, when a raging wildfire threatens the lives of her loved ones, Kristin summons all of her strength and resolve to rescue her family and save the day.

There are no critic reviews yet for Trial by Fire (Smoke Jumper) (Raging Inferno). Keep checking Rotten Tomatoes for updates!

There are no featured reviews for Trial by Fire (Smoke Jumper) (Raging Inferno) at this time.