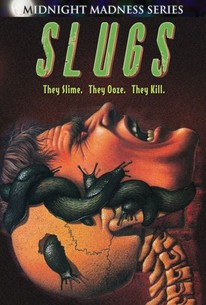 Giant man-eating mutant slugs create all sorts of slimy havoc in this horror film. It is a health inspector who solves the mystery of the ghastly garden gastropods. Apparently the slugs have been feeding in an area contaminated by toxic wastes and this has created the monstrous mutations. Now he and the rest of the town must figure out how to stop them.

Creature feature in which humans prove just as carnal and odd as the mutant slugs killing them.

Its favouring of visceral revulsion over dramatic tension may deter general audiences, but for fans of the ludicrous and the gross, Slugs has much to offer.

Silly grizzly horror flick; one that is so bad, it's good.

there are most things more terrifying than slugs

...offers little in the way of entertainment.

Like a stuffed crust pizza, the film gets cheesier the further into it you get.

Wooden is a polite word to describe the acting that goes on in Slugs.

Slugs is a fun B movie about killer meat eating Slugs. The film should be viewed by every horror fan that enjoys nature gone wild films. Though it has a very silly premise, Slugs doesn't disappoint. Gore hounds will enjoy the amounts of gore that the film offers. Slugs is a fun horror comedy and though it doesn't have any good acting, the film more than makes up for that with the effective gore effects. Pieces director Juan Piquer Simon has fun with the script, and delivers a film that is a lot of fun to watch. Slugs is of course silly, but what do you expect? This is still a film worth seeing, and for horror fans that enjoy silly horror, Slugs is a definite must see film. Like I said, the effects are great and it's what makes this film worth seeing. Slugs is different than your regular killer creature film, and it works. The film may be imperfect, however it is very entertaining. Slugs can easily be seen as a guilty pleasure and though the premise is ludicrous, the film has enough good elements to make it an enjoyable viewing experience. The film has great gore, and a decent story, and the acting isn't too bad considering, but it definitely isn't the best either. This still a good horror comedy and it will definitely appeal to fans of silly horror films. With a film titled such as Slugs, you can't really expect a phenomenal bone chilling horror film can you? A good film, that has some good gore effects that is the standout of the film.

A highly enjoyable and entertaining film from Juan Piquer Simon (of Pieces infamy). That should indicate to you the kind of experience this is going to be. It is a fairly cheesy, but also highly enjoyable 80's genre horror film. This one isn't quite as zany and batshit crazy as pieces, but you can still tell this is made by the same person. Technically probably a better film, with a slightly more unique premise, than Piences which when all is said and done was a generic slasher flick, albeit one with it's own personality, and dark sense of humour. This time around, a small towns water supply has been infested by a rare breed of carnivorous slugs. People keep turning up devoured, and the mutant slug theory for this is naturally thrown out as the insane ramblings of an overworked health inspector. Ultimately the health inspector must take it upon himself to destory these vermin, so concocts chemical compound that will burn the slugs, and naturally blow up most of the town. While not excessive in its gore, there are a few scenes that will satsify the gorehounds (the restaurant scene, the greenhouse scene and the bedroom scene mainkly.) There are a lot of explosions so pyros should enjoy themselves with this one as well. Not as much unintentional (or was it intentional?) humour as Pieces. This feels like a slightly more accomplished and more professionally made film. Not a dull moment to be found. Recommended.

Slugs, Muerte Viscosa is set in the small American town of Ashton where two lovers (Erik Swanson & Karen Landberg) are out in a boat on a river, after dangling his foot in the water the guy is pulled in & soon after the water turns blood red... That night Ron Bell (Stan Schwartz) the local drunk (every town has one) staggers home, once inside his pigsty of a house he is attacked & partially eaten by vicious slimy flesh eating Slugs. The following morning Mike Brady (Michael Garfield) the town's health inspector together with Sheriff Reese (John Battaglia) head for Ron's house to evict him, inside they discover his half eaten corpse & a load of slime across the floor. Meanwhile an elderly woman named Jean Morris (Lucia Prado) complains to her husband Harold (Juan Majan) that her plants are covered in Slug eggs, while Harold isn't looking a Slug crawls into his glove. Harold puts his glove back on (just the thought of this in reality really grosses me out) & feels intense pain which makes him thrash about & cause an accident that blows his greenhouse up. The mysterious deaths continue at an alarming rate, after examining the evidence Mike suspects that killer Slugs mutated by toxic waste may be responsible but has a hard time convincing anyone. Can Mike, sanitation inspector Don Palmer (Philip McHale) & scientist John Foley (Santiago Alvarez) find a way to stop the Slugs before they eat the entire town? This Spanish American co-production was co-written, co-produced & directed by Juan Piquer Simon as is one of those so bad it's good goofy horror films that just entertains on a stupid moronic level, we have had killer Bee, Crocodile, Bear, Shark, Spider & Snake films so why not killer Slugs? First of all I must say that I have a real fear & dislike for Slugs, as in real life. I'm not sure why but I just find them disgusting, maybe it's the slime or how they look I don't know but some of the footage in Slugs really grossed me out, not the gore but just the Slugs themselves. The script by Simon, Jose Antonio Escriva & Ron Gantman is based on the novel 'Slugs' by Shaun Hutson & is really dumb, the best way I can describe it is imagine a slasher film like Friday the 13th (1980) with slugs instead of Jason as the film goes from one scene of someone being killed by Slugs before they disappear to another just as a film like Friday the 13th would go from one murder to another. Don't expect a eco-disaster film like The Swarm (1978) where the whole town is evacuated & the army move in. Some of the dialogue in Slugs, Muerte Viscosa is absolutely hilarious, from the grumpy Sheriff's wisecracks to the fact that the filmmakers thought we would all be so stupid as to not know what Slugs eat so they include a scene in which a health inspector ask's a scientist! It's almost as if they were making a comedy horror although I suspect that the very fact Slugs, Muerte Viscosa had a mainly Spanish crew would account for the awkward & silly dialogue. Also someone should tell the filmmakers that Slugs don't swim in water & in regard to any potential victims why couldn't they just walk, lets face it Slugs travel about 10 feet an hour, away? Oh, & how do Slugs drag a dead body along, pull someone under water or yank a bar out of someone's hand? Director Simon doesn't do much to liven things up & the film hasn't got any sort of style to it. On a (very) positive note he doesn't mind splashing the blood & gore around, there are numerous gory half eaten bodies, someone cuts his own hand off with an axe, lots of blood spraying, horrible scenes of people covered in Slugs (quite literally possibly my worst nightmare) & a gross sequence where an unlucky man has lots of Slug parasites eat their way out of him with blood splattering results. Technically Slugs, Muerte Viscosa isn't too bad with the gory special make-up effects being particularly impressive & the Slugs themselves look good as well, having said that I presume they used real Slugs so they would look good, wouldn't they? Shot partly in Spain the locations are OK, the photography is fine & as a whole it's fairly well made. However, the acting is pretty bad & most of it looks dubbed. Deep down I know Slugs, Muerte Viscosa is a terrible film but there was something about it that just entertained me, maybe the gore, maybe the silliness of it all or maybe the fact that I have had a real psychological dislike & morbid fear of Slugs for as long as I can remember. I can't in good heart recommend it but on a personal level I liked it. They Ooze... They Slime... They Kill... Slugs!

Hilarious in every conceivable bad way. Starting off with some poorly dubbed over lines and even less convincing acting. Then we are treated to the title Slugs...The Movie. Just so you don't get confused going in thinking this may be the novel. It is definitely the film version. We are soon in a small town where people demand their questions answered but refuse to answer anybody else's. Every body seems kind of pissed to be living here, especially the sheriff who has a go at everyone. He'll shout at you for doing your job or for not doing your job, he really doesn't give a fuck. Nice to see that some of the best takes the film could get of certain lines were of the actors blowing them. Stammering and stuttering their way through a lifeless script. Some nice FX of exploding eyeballs, the film however cannot make up for the fact that slugs are just not threatening. People try and chop off their own hands, things explode and the dialogue is so outrageous you'll be laughing all the way to the upbeat music of the last shot. Huzzah.