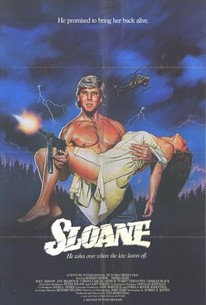 In this cops-and-robbers drama, a former L.A. policeman, Philip Sloane (Robert Resnick) is called in on the case after a woman is kidnapped in Manila and her husband is killed. Once he arrives in the Philippines his old buddy Pete Saimi (Raul Aragon) joins him in looking for the kidnappers, and Pete's sister Naili (Carissa Carlos) joins Sloane for a romantic assignation. Pete and Naili keep Sloane busy until the mystery behind the kidnapping is solved after several car chases and bullet-ridden shoot-outs.

There are no critic reviews yet for Sloane. Keep checking Rotten Tomatoes for updates!

There are no featured audience reviews yet. Click the link below to see what others say about Sloane!