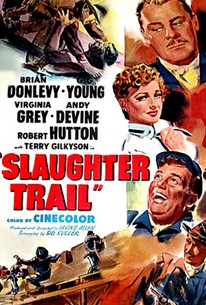 The Cinecolor "A" western Slaughter Trail anticipated High Noon by having its story narrated in song by troubadour Terry Gilkyson. The basic plotline is a traditional Indians-vs.-whites affair, with cavalry officer Dempster (Brian Donlevy) trying to undo the damage created by Indian-hating bandit Vaughn (Gig Young). Upon cold-bloodedly murdering two Navajos, Vaughn has fomented a deadly tribal war, with Dempster's cavalry post right in the middle. Other endangered species include a supposed damsel-in-distress (Virginia Grey), who turns out to be Vaughn's accomplice. Filmed in 1950, Slaughter Trail was purchased by RKO head-man Howard R. Hughes in 1951. Hughes withheld release of the film until he was able to reshoot all scenes involving Howard da Silva, who'd originally been cast in the Brian Donlevy role. Da Silva was under a political cloud as an alleged pro-communist at the time, and the xenophobic Hughes wasn't about to release any film with a "Pinko" in the lead.

Fenton Jones
as Caller
View All

Routine western with an unconvincing redemption scene at the end.

There are no featured audience reviews yet. Click the link below to see what others say about Slaughter Trail!