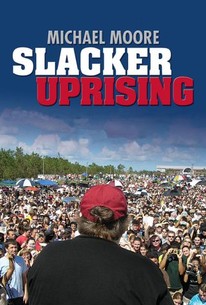 Opinionated documentary filmmaker Michael Moore takes an up-close look at the political leanings of college students in George W. Bush-era America with this effort shot during Moore's 60-city college campus tour in the months leading up to the 2004 election. The first feature-length film by a major director to make it's official premiere for free on the internet, Slacker Uprising finds Moore giving up any hope for making a profit on the film (which was budgeted at $2 million) in favor of getting his message out to the largest possible audience. That message? "Get off of the couch and give voting a chance." By taking the "Slacker Uprising Tour" to college campuses across the country and offering attendees a free change of underwear, a box of Ramen noodles, and a vow never to begin an event before noon nor allow any politician to speak at one of their events, Moore and his traveling band of speakers, comedians, and musicians managed to fill basketball arenas and football stadiums across the country with apathetic students who hungered for a serious sea change in the American political landscape. Featuring special appearances by R.E.M., Eddie Vedder, Viggo Mortensen, Roseanne Barr, Joan Baez, and Rage Against the Machine guitarist Tom Morello.

Whatever its intent, this interminable 96-minute highlight reel plays like Moore's homage to himself.

Moore's studentmobilization drive now looks prescient, but he should have kept this piece of wallpaper agitprop on the shelf.

...this repetitious and self-indulgent hodgepodge comes across as a nostalgia-drenched vanity project, with far too much footage of various celebs at assorted gatherings introing Moore as the greatest thing since sliced bread.

Slacker Uprising is empty as protest satire goes, and it lends a cudgel to those who think Moore does what he does for the sheer sake of ego and power.

Michael Atkinson
In These Times

Decide for yourself what "Slacker Uprising" is and what the rewards were, if any; I had a real love-hate relationship with it...

It doesn't offer enough fresh material either to inspire or to infuriate.

Slacker Uprising feels more like a commercial for its maker than any sort of artistic endeavor, and because of the election's outcome, its release is more than a little baffling.

Slacker Uprising is a minor Michael Moore work, without a doubt. It's for hardcore fans only. If you're one of them, it's worth a look, but don't expect to be blown away.

Though there was the odd useful fact or touching moment, this "documentary" was largely a self-serving dud. Eddie Vedder and Steve Earle perform, Rosanne Barr does five minutes of decent stand-up, but otherwise, very little of interest happens. It's like watching Moore's Oscar Speech: The Road Show. I admire Moore as a flimmaker, but this film chronicles Moore right on the heels of Fahrenheit 9/11 - I think his sense of self-importance was incredibly inflated at the time. Skip this one.

Definately not a regular awesome Moore doc. Seems like it was just thrown together and especially seems irrelevant because Bush has been in office for the past 8 years, but also is strange because we just elected Obama!

Slacker Uprising seems to be a combination of the kind of footage you'd find on a "bonus disc" of a deluxe DVD release and self-fellatio; there's not alot here to find entertaining or even interesting if you're not a fanatical Michael Moore devotee or Moore himself. This documentary, which follows director Michael Moore around the country as he campaigns for the democratic party in the 2004 election, is available for free download online (and watching it seems to be a chore you wouldn't want to pay for) at "[url="http://www.slackeruprising.com"]www.slackeruprising.com[/url]". Very little production seems to have gone into the film (or even the tour itself), which suffered from poor editing and especially poor sound mixing (I found myself having to constantly adjust the volume as some scenes blared and others whispered). The focus of Moore's 2004 election tour centered on the war in Iraq, getting Bush out of office, and getting college kids to vote. He brought out many guest musicians who sang protest songs (including a truly dreadfully self-aggrandizing acoustic performance by "Rage Against the Machine's" Tom Morello) mired in the kind of self-importance only protest songs seem capable of manufacturing. Michael Moore seems to be the kind of person when, even when he's right (as he was about Iraq), he generates a great deal of hostility. For whatever reason, he manages to strike an unappealing chord in alot of peoples' hearts. It's just fortunate for him that his opponents are so much more wrong-headed and unappealing in their views and positions, they come off in this film as little more than shaved baboons (and it's not through editing or special effects either, they're really just that stupid). Despite the controversys surrounding the tour, and subsequent attempts by local republican politicians and businessmen to get the rallies shut down, there's little that's actually happening in this film. The rallies, speeches and protest songs for the first 70 plus minutes, make it seem as though you're watching C-span coverage rather than an actual documentary. And the Bush presidency or even the 2004 election holds very little relevency post Obama election. Slacker Uprising is a film that died at birth. Better luck next time, Michael Moore.