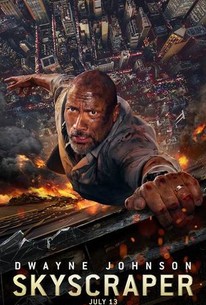 Global icon Dwayne Johnson leads the cast of Legendary's SKYSCRAPER as former FBI Hostage Rescue Team leader and U.S. war veteran Will Sawyer, who now assesses security for skyscrapers. On assignment in China he finds the tallest, safest building in the world suddenly ablaze, and he's been framed for it. A wanted man on the run, Will must find those responsible, clear his name and somehow rescue his family who is trapped inside the building...above the fire line.

Dwayne Johnson
as Will Sawyer

Hannah Quinlivan
as Xia
View All

With a panache worthy of Oscar Wilde, Johnson delivers lines such as: "This is stupid!"

It would be fair to say that Skyscraper does what it sets out to do but the unambitious agenda isn't something I'm especially interested in watching.

The pleasures here come from watching an extraordinary physical specimen go through a lo-tech workout routine thousands of feet above the ground as he tries to rescue his family from a burning superskyscraper.

As a streaming option on a slow night or a long flight, the movie has its uses. But you've seen almost all of this before, with more wit and a better villain.

he bulk of Skyscraper is about the impressive special effects, impossible stunts, and better-than-average (especially for an action film) use of all of the major players in terms of avoiding making them all one-note creations.

Skyscraper has such potential, fifty percent of which is squandered by its misunderstanding of how cinematic thrills should work (at least to my taste).

Pushes the whole "Dwayne Johnson is strong" thing to the limit, but who the hell cares when there's such unbridled joy to be had whilst viewing so

It's the Die Hard summer blockbuster you'd expect, but not drawn out for the sake of more explosions. Don't expect any awards for this plot line.

Die Hard in a (X) is a pretty classic movie formula, it doesn't get as much play now as it did in the 80S and 90S, but we can still reliably expect at least one every couple of years, even now. But when it's Die Hard in a Skyscraper... I mean... That's just Die Hard. Even Die Hard 2 had the sensibility to be Die Hard in an Airport. Except that, no, this isn't just Die Hard, because (and I don't think anyone would be shocked to find this) it's not as good. I mean I love The Rock and all, but come on.

Dwayne Johnson has fought giant monsters, earthquakes, armies, drug cartels, race-enthusiast criminals, and video game villains, so now, as we run out of opponents, enjoy Dwayne Johnson versus... a building. Skyscraper is much more Towering Inferno than Die Hard, as Johnson plays a security specialist fighting to break into a burning building in order to rescue his family from a group of armed criminals. It's a movie that struggles to keep pace with schlock throughout its relatively brisk running time. There are some definite detriments, like a team of uninteresting villains with a pretty haphazard plan (in order to flush out a rich guy, they... set a building on fire?). Some of the sequences are just goofy in conception, like an access panel placed right under a spinning turbine, or a top floor architectural design that makes no sense except to provide a requisite location for a "hall of mirrors" finale. However, it's a perfectly serviceable action thriller, with a better handle on the material than I would have thought for the director of ribald comedies We're the Millers and Central Intelligence. Johnson is a perfectly magnetic leading man and the plot has a satisfying A-to-B-to-C progression of obstacles and practical solutions. Neve Campbell plays Johnson's wife and she is actually given important things to do rather than being a damsel in distress. She even saves the day. Skyscraper won't be a movie you'll remember long after having seen it, but it's got enough charm and decently structured set pieces to serve as disposable entertainment. Nate's Grade: B-

When you see that Dwayne Johnson is headlining a movie, your first thought shouldn't be to think that it has awards potential. Sure, he may decide to switch up his career as he gets older, but he loves choosing films that play it safe and entertain his audience in a pleasing way. He knows his audience and he plays the same character well every time. Watching the trailers for Skyscraper, I knew exactly what to expect from this movie, and although there's definitely more heart to the movie than I was expecting, if you've seen the trailers and predict the way this film plays out in your head, you've pretty much already seen it. Skyscraper is a disposable action flick, but it's absolutely worth a watch and here's why. The premise is very simple; an ex-military operative has lost his leg in an explosion and now owns a security company and wishes to be in touch with the people who are about to finish constructing the tallest building in the world. With a unique design, many things can and will go wrong. Thrust into action once evil men take over the building, he must find a way through the building and back to his family, who are held hostage. The plot plays out from there exactly how you think it would, but it's the particular moments that will thrill audiences and the devotion that Will Sawyer (Dwayne Johnson) has to his family. It seems like I'm beating a dead horse in stating that this film is elevated by the charisma of Johnson, but it truly is. Not only is he as likable as ever, but he takes on a more dramatic role here, leaving out a lot of the comedy. He and Neve Campbell (who plays his wife Sarah) have surprisingly solid chemistry here and that aspect of this particular film is what had me wanting to root for him to succeed. That being said, if you're hoping this film isn't quite like the promotional material and that it takes itself a little more seriously than having its leading man jumping from a crane onto the tallest building in the world, then this definitely won't impress you all that much. The one drawback to this movie, in my opinion, was the over-the-top set pieces. This movie decides to take itself very seriously at times and the performances work very well in that respect, but when you have a man dangling outside of a building, with nothing but a rope and wrapped prosthetic leg keeping him alive, the notion of "suspension of disbelief" only goes so far to save it. Many viewers may find the set pieces to be incredibly entertaining (I surely did), but I found they didn't particularly mesh with the movie that was being told. This film tries to reach the levels that the original Die Hard did, and for that reason alone, the ridiculous action slightly took away from the experience. In the end, Skyscraper delivers on pretty much everything it promises and even adds a layer of emotion when looking at the family dynamic. Director Rawson Marshall Thurber knows how to make a fun action movie and that's exactly the word I would use to describe a movie like this. It almost seems cliche to call a movie like Skyscraper "fun," but that's the best word to describe this movie without sounding negative. It's about as derivative and generic as action movies come, but it pulls everything off pretty well, making for a solid watch. It's not going to win any standing ovations, but it will surely serve as a fun blockbuster to see this summer. If you're looking for an easy watch at the movies, I'd recommending checking out Skyscraper.