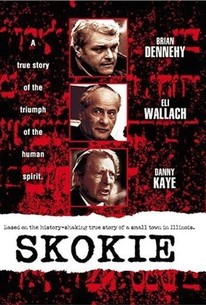 Skokie is the true story of a critical test of Constitutional rights in Illinois. In 1977, a small band of American neo-fascists calling itself the National Socialist Party of America plans to stage a swastika-dominated demonstration and rally. Their intended site is the Chicago suburb of Skokie, a town populated predominantly by Jews--many of them survivors of the Nazi holocaust. Jewish ACLU lawyer John Rubinstein is compelled to lobby for the National Socialists' freedom to express their views, despite his own inner turmoil over defending the very people who'd destroy him. The most vocal opponent to the planned rally is Skokie senior citizen Max Liebman (Danny Kaye), who spent five years in Hitler's death camps. Ernest Kinoy's teleplay for Skokie is fair-minded to a fault, presenting all points of view with equanimity, proving that there are no simple solutions when the fundamental right of Free Speech is involved.

Dick Cusack
as Board Member

Jack Orend
as Nazi
View All

There are no critic reviews yet for Skokie. Keep checking Rotten Tomatoes for updates!

Powerful with a great cast.