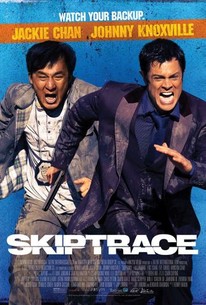 Fists and feet are flying in this explosive action-comedy starring Jackie Chan and Johnny Knoxville. For years, by-the-book Hong Kong detective Benny Chan has tried to avenge his partner's murder at the hands of a drug lord. When Benny learns that freewheeling American gambler Connor Watts (Knoxville) has the evidence he needs, he teams with Connor to get justice.

On DVD This Week: Lights Out, Hunt for the Wilderpeople, Nerve, and More
The Light Between Oceans Is Beautiful but Uneven

Even if Chan no longer wants to put his life at risk as a martial arts Buster Keaton, he still has the ability to turn a joke and get a gasp out of an action sequence.

Mr. Chan has done these unlikely-buddy yarns before, of course - "Shanghai Noon," the "Rush Hour" movies - and sometimes has made the conceit work, but this incarnation lacks originality and spark.

All the principals are plenty capable, but this is hardly any of these folks' peak.

Skiptrace is a movie made to serve a number of competing interests and markets, and in trying to offer the proverbial something for everybody, it ends up possessing a very limited appeal.

Glossy, colorful, and forgettable, "Skiptrace" is the kind of movie that gives you your money's worth in sheer eager-to-please entertainment even as you roll eyes at the nth kick-to-the-crotch gag.

For all the comforts nostalgia might bring to Skiptrace, the film's also a pretty good reminder that the Rush Hour era brought with it its fair share of cringeworthy shit.

Ultimately, despite its generic storyline and overall ridiculousness, Skiptrace remains surprisingly watchable, mostly because of its affable leads and the steady supply of humour.

The blandness and slapdash feel can't be ignored and the film becomes an interesting experiment signifying little.

The problem with Skiptrace is that it seems as a labored and redundant rag-tag vehicle trying to bask in the shadowy spirit of Chan's typical big screen, high-wire Hong Kong police procedurals from yesteryear.

Skiptrace feels like a classic Jackie Chan movie, one that matches the fisticuffs with physical comedy.

If you like Jackie Chan's brand of cinema, make no mistake; you will enjoy this.

I seem to say this a lot in latter-day Jackie Chan movies, but it's almost sad to watch him in films like this simply based on the fact that he simply cannot do what he did when he was a younger man. One of the sadder elements of this is watching the outtakes that they always show post-credits. And I say that because you get to see Jackie harmed by stuff that he would have brushed off in the 80s. That's not a criticism of Jackie at all, it's just that age catches up to everyone, even people that earlier in their careers might have seemed invincible. Jackie still remains a complete and utter legend, his legacy has already been established and he doesn't need to take any more unnecessary risks at his age. A lot of the latter day Jackie movies have relied more on his name and his considerable charm more than anything else. There's still action, but that's not necessarily the entire focus on the film. And this one is no different. Jackie is obviously not the world's greatest actor, though I think he's better than many people give him credit for, but he's always had a very affable personality and people are drawn to him because of that. Maybe not so much now that he hasn't had a major box office success, at least on this side of the world, since Rush Hour 3 and even that movie wasn't that hugely successful. This obviously isn't counting his work in films like Kung Fu Panda, which he is a relative small part of. I digress, this movie relies on the formula set forth by Rush Hour and Shanghai Knights/Noon. You have Jackie, who always plays the idealistic and honorable type, against someone who's the exact opposite of him. Rush Hour doesn't fall into that category, but you had a fast-talking, quick-witter Chris Tucker for him to play off of. In this movie, the Chris Tucker/Owen Wilson role is filled by Johnny Knoxville. Yes, the same Johnny Knoxville from Jackass. And, now that I think about it, I can see the similarities between the two. That might be a blasphemous comparison to some, but both guys have pretty much put their bodies on the line for their specific style of film. Knoxville may have done it in a setting where it's just a bunch of dudes hurting themselves for the audience's amusement, but he's still risking his body. Chan obviously risked his body in films that had some semblance of narrative, so you can't really truly say that they do the same thing for the same reasons. But the similarities are obviously there. And, honestly, Johnny and Jackie make a surprisingly solid pairing. Johnny Knoxville, once you overlook that Jackass made him famous, isn't a bad actor in the slightest. I'm not saying that he's the next Daniel Day-Lewis, but he's good as the annoying sidekick. And since this is the role he plays here, he does a pretty good job and he obviously has chemistry with Jackie. The problem is, though, that the story that's around them is literally nothing to write home about with a twist/reveal that you can see coming from one million light years away. Particularly if you even know the absolute basic of Hong Kong cinema. The story, as far as I'm concerned, is just there to get Johnny and Jackie next to their bit of buddy film stereotypes where they banter. As I mentioned, Johnny and Jackie do have some chemistry, but I do not believe the movie exploits that as well as it could, because the material they have doesn't really allow them to do much. The jokes are tired, the action is a bit bland and the editing is an absolute mess. And, as I mentioned, the narrative is not particularly essential to the actual film. And there's some downright cringe-worthy scenes. Like Jackie and the entire Mongolian village breaking into a cover of Adele's Rolling in the Deep. It's such a bad scene and it literally makes no sense regardless of whatever context you try to look at it in. It doesn't serve the movie in any way. You could say that it helps to show Connor (Knoxville) a different side to Benny (Chan), who's always portrayed as super serious. And even then, why would the entire Mongolian village join in? That's the part that gets me and the part that makes the scene so bad. It is what it is, but it's not a particularly effective scene. I don't wanna say this movie had potential, because it really didn't, but this should have been better than it actually was. It was watchable enough with Jackie Chan and Johnny Knoxville having some good chemistry, but that's all they relied on. The story is lame, the action isn't memorable and the editing is awful. You need more than just chemistry between your leads to tell a good story and this movie didn't have that. It's a slightly below average movie that I didn't hate, but I wish would have been better than it actually was. Then again I guess you could say that for every movie I don't like. Not recommended, but you can do worse.