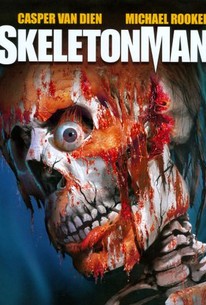 An ancient Native American spirit in the form of a cloaked skeleton on horseback is hunted by a group of soldiers in this made-for-cable Predator knock-off. Michael Rooker stars as the captain of an elite squad of government assassins that are sent to bring down a deadly and mysterious force that has been decapitating oil refinery workers throughout a nearby chunk of wilderness. Needless to say, when they are faced with the teleporting skills of thier opponent, they soon find that all the training and firepower are nothing when compared to the sword-wielding fury of the Skeleton Man!

There are no critic reviews yet for Skeleton Man. Keep checking Rotten Tomatoes for updates!

So bad it's good, I love this movie,seriously

Well a Good B Flix, Would be alright for Halloween watchers, maybe the opening movie, get things going. I would figure that after the first 10,000 rounds of bullets they might have figured that this guy is like Superman. Also typical stereo type movie as to how alot of people think our militray people act. get a grip movie makers. I picked it up in a pawn shop for $3.00, well worth that.