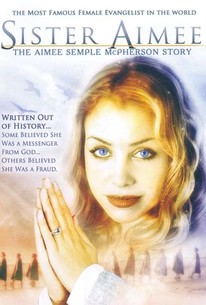 Richard Rossi's low-budget, direct-to-video feature Sister Aimee dramatizes the life of controversial American evangelist McPherson (here portrayed by Mimi Michaels). One of the leaders of the prohibition movement of the 1920s (alongside Billy Sunday) and the sort of person for whom the term "fire and brimstone" was invented, Aimee drew a wealth of media attention not only for her behind-the-pulpit antics, but thanks to a rocky personal life that witnessed her marrying and divorcing three separate men. Particularly strange was a 1927 incident, when Semple visited the beach - and promptly disappeared - only to turn up not long after and insist that she had been kidnapped. Rossi chronicles these events with the assist of a cast that includes Rance Howard and Joe Gonzalez.

There are no critic reviews yet for Sister Aimee: The Aimee Semple McPherson Story. Keep checking Rotten Tomatoes for updates!

There are no featured audience reviews yet. Click the link below to see what others say about Sister Aimee: The Aimee Semple McPherson Story!