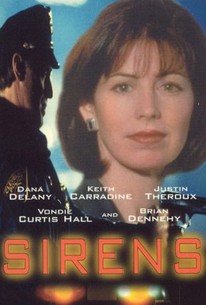 In this racially charged drama, Sally (Dana Delaney) is a white woman who is making out with Edward (Vondie Curtis-Hall), her black husband in a parked car when a group of policemen surround the car and murder Edward. The officers then plant phony evidence at the scene of the crime that would point the blame away from them; Sally knows this is a sham and is determined to find out the truth and bring the cops to justice.

Robert B. Kennedy
as Fenwick

Bruce Clayton
as Meyer
View All

There are no critic reviews yet for Sirens. Keep checking Rotten Tomatoes for updates!

There are no featured reviews for Sirens at this time.