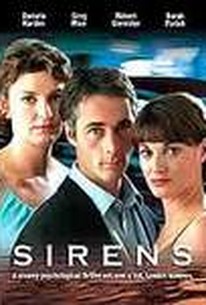 Not to be confused with John Duigan's hit 1994 sex comedy of the same name, Nicholas Laughland's 2002 British telemovie Sirens stars Daniela Nardini, Greg Wise, Robert Glenister and Sarah Parish. This psychological thriller concerns Ali (Parish, a London-based female law officer simultaneously involved in a heated and clandestine carnal relationship with her sister's beau and a city-wide police hunt for a serial rapist. When the squads close in on the boyfriend as their number one suspect, it foretells Ali's need to 'lay down her cards' by confessing her relationship to the man in question. But this may mean permanently losing all ties with her sister. Ali suddenly finds herself torn violently in two directions - but she's quickly running out of time, as new details come to light regarding the suspect's background and motivations. ~ Nathan Southern, Rovi

There are no critic reviews yet for Sirens. Keep checking Rotten Tomatoes for updates!

There are no featured reviews for Sirens at this time.