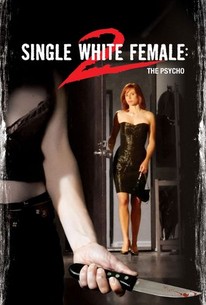 A woman in search of a new roommate finds that sharing an apartment can be murder in director Keith Samples' belated sequel to the 1992 thriller Single White Female. Things just aren't going well for Holly Parker (Kristen Miller). In addition to her cheating boyfriend, a scheming co-worker keeps undermining every shot Holly has at a promotion, and on top of it all, her rent is simply too much to handle alone. When her search for a roommate leads Holly to shy but sweet Tess Kostitch (Allison Lange), the troubled renter thinks she may have finally solved at least one of her woes -- but this roommate has a big secret. It doesn't take long for Holly and Tess to become friends, but in Tess' warped view of friendship, there is no kinder act than putting a friend in pain out of their misery. When Tess learns about Holly's unfaithful boyfriend and the trouble that Holly has run into attempting to land a big promotion, Tess prepares to do her new best friend a favor and make all of her troubles go away in the flash of a blade. ~ Jason Buchanan, Rovi

Laura Rogers
as Realtor
View All

...a bad, incompetently made film with virtually no redeeming qualities...

Did I miss something? In the original Single White Female, did Jennifer Jason Leigh NOT play a psycho?

It's not awful, but it's pretty pointless. Feels like watching the original with a less convincing cast and lower budget. There's a few very minor changes, but mostly it's a remake. To be honest, I was pretty bored through most of it. I think I vaguely remember renting it when it was first released and couldn't remember it at all - now I remember why, nothing of note at all here. If you have never seen the original, it "may" be acceptable viewing if its on TV, but otherwise, give it a miss.

It was as I feared, almost a remake of the original with some scenes/ideas taken straight from the first film. I knew what to expect but hoped for some new twists shocks, not the same ideas from the first. Stick with the very good original, and miss this low budget follow up.

Independent sequel? How about poor re-imagining?

This "sequel" takes place in the big busy city where two roommates/business partners eventually clash, forcing one to move out and (if you didn't see this coming like a freight train) into the apartment of a lonely quiet girl who turns out to be an obsessive nut case. This movie is pretty much the same as the original, save for some different plot twists and turns here and there that lead up to what might be the most boring climax in movie history, taking place in an apartment building hallway. What fun. I agree with what one person said about the "psycho's" wig in the first part of the movie being terrible, but what was worse was the wretched black bob wig worn by the main character's ex-roommate in an attempt to make her look sexy and exotic.