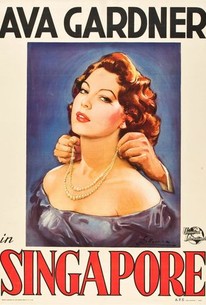 In this adventure, a WW II veteran sailor goes back to Singapore to resume his pearl-smuggling business. The story then flashes back to chronicle the events that led to his becoming a smuggler. First he wooed and married a lovely lady. On their wedding night, a Japanese squadron bombed their hotel and his bride was killed--at least he thought she was killed. Later he discovers that she survived the blast but lost her memory. She then married another man. Meanwhile the smuggling sailor is pursued by gangsters who try to force him to tell them where he hid a valuable cache of pearls before the war. To get him to talk, they kidnap his former lover. He saves her and happiness ensues.

A lot of technical competence, a certain amount of talent and a staggering amount of time and money have been marshaled into a quiet, polished frenzy about nothing whatever.

Ava and MacMurray were in great form.

There are no featured reviews for Singapore at this time.