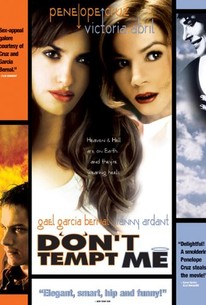 Critics Consensus: More Hellish than it is Heavenly, Agustín Díaz Yanes' black comedy about the Earthly duel between two angels doesn't have enough genuine laughs to support its far-fetched premise.

Critics Consensus: More Hellish than it is Heavenly, Agustín Díaz Yanes' black comedy about the Earthly duel between two angels doesn't have enough genuine laughs to support its far-fetched premise.

Critic Consensus: More Hellish than it is Heavenly, Agustín Díaz Yanes' black comedy about the Earthly duel between two angels doesn't have enough genuine laughs to support its far-fetched premise.

Two of Spain's biggest female stars headline this offbeat comedy about the battle of wills between good and evil. Heaven is not getting its fair share of business for the afterlife, so Lola (Victoria Abril), an angel who sings in a nightclub located beyond the pearly gates, is sent to Earth to drum up business by her boss, Marina (Fanny Ardant). Her first prospect is Manny (Demián Bichir), a prizefighter with an injury that could take his life at any time. As Lola tries to claim Manny's soul for the Lord, the wicked Jack Davenport (Gael García Bernal) believes that the Devil deserves the boxer's soul, and he sends one of Hell's waitresses, Carmen (Penélope Cruz), to seal the deal. On Earth, Lola takes the form of Manny's former love and urges him to mend fences with his mother, while seductive Carmen tries to persuade Manny to return to the ring, knowing that another fight would mean his death. While Lola and Carmen wage war over Manny's soul, they maintain their cover by working at a grocery store, where they both learn a few lessons about the pitfalls of earthly capitalism. Meanwhile, Manny is dealing with financial problems of his own -- he owes money to the city's corrupt police commissioner (Emilio Gutiérrez Caba), who is using his strong-arm men to "persuade" Manny to pay up. Released in Europe as Sin Noticias de Dios (which translates as No News From God), Don't Tempt Me was a box-office success in Spain when it was released in late 2001, though it wouldn't reach American theaters until 2003.

Elsa Pataky
as Waitress in Hell

It's all harmless fun, I suppose, and mercifully free of all the cant usually associated with fantasies of Heaven and Hell.

Manny is so uninteresting as a pivotal character that he's a black hole who sucks away our investment in the film.

A sultry, pretty thing with a few good ideas: in other words, stuck in limbo.

Consistently clever and inventive on a level a little below the inspired.

It's only sporadically entertaining.

Bendito Infierno's characters crack and pop off the screen; you're caught up in their tussle even as you acknowledge its artificiality.

As tempting as it is to describe the level of humor in Don't Tempt Me as hellish, that's probably giving the movie more credit than it deserves. Although describing anything in this dark comedy as heavenly is even more of a stretch.

A train wreck of half-developed ideas without a unifying thread.

A barely comprehensible mess ... Fun is something in very short supply in this would-be comedy.

The relative surrealistic element of the movie is what made it interesting. The rest was ok. I like it when Cruz doesn't play the pretty girl.

Great movie! Penelope and Victoria are absolutely a great pair of characters. In this film, one is good, and the other supposedly bad. Despite the line of duties, the two vie for the soul of a boxer. The two realize that they are both doomed regardless of the outcome. Great cast- Victoria Abril, Penelope Cruz, Gael García Bernal, Fanny Ardant, Demian Bichir, and Elena Anaya. Definitely worthy!

Victoria Abril and Penelope Cruz get sent by heaven and hell respectively, to win the soul of a sad, weak woman-beating loser. Apparently heaven is a bit like black & white Paris filmset and rather empty, and hell is like a giant multi-storey prison with lots more people in it, and there's a Checkpoint Charlie between the two to separate the good from the bad, but that could all change if the wrong side wins, so beware.

It's a Tarantinoesque telling of a good angel and a bad angel who fight for the soul of a boxer. I found it interesting and a bit weird, but overall i liked it.