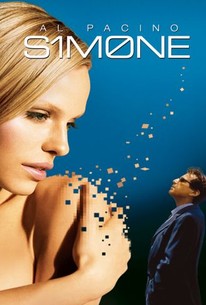 Is the time approaching when a persona in its entirety could be a mere fabrication of modern culture and technology? Or did Hollywood enter that time long ago? Either way Viktor Taransky (Al Pacino) finds himself growing more and more aware of the media-obsessed culture in which he tries to earn his living. Taransky is a film director struggling to survive in an industry that doesn't require or want his artistic vision. When first he meets a stranger whose vision is considered somewhat questionable, he doesn't realize the potential of the idea to digitally incorporate a character into his otherwise unsalvageable film. However, in time, not only the director and the entire studio, but American pop culture at large will grow to embrace Simone. As Taransky earns popularity and acclaim via the success of the digitally constructed actress he "discovered," he struggles to define his own identity as an artist and a person, and finds that lying to cover up Simone's non-existence is altering his life entirely. His ex-wife and former employer Elaine (Catherine Keener) notices the difference in his personality, upsetting their daughter Lainey (Evan Rachel Wood) and her hopes of their reconciliation. Meanwhile, stray paparazzi turned private investigators threaten to make public incriminating evidence, which could destroy the limelight Taransky enjoys while "hiding" Simone. Amazingly, what Simone doesn't say or do creates all the more buzz, and causes Taransky to face the reality of his industry. Written and directed by Andrew Niccol (Gattaca), Simone takes a satirical approach to an otherwise fantastical comedy. ~ Sarah Sloboda, Rovi

Jeff Williams
as Man in Suit

Daniel Do
as Monk

Lions Gate Warms Up to the "Lord of War"

While the script starts promisingly, it loses steam towards the middle and never really develops beyond attacking obvious target.

Niccol smartly contrasts the bland, blond beauty of computer-colored Simone ... with the brunet vividness of Keener.

Though at times the satire is over the top, Simone raises some interesting and troubling questions about the future of cinema.

An industry satire that's less funny than half-empty and hyper-designed.

You don't so much admire the movie as feel bludgeoned by its attitudes, however commendable they may be.

It goes on a little long, but isn't terrible.

Fails on all points of plot, characterization, plausibility and realism...

Low-key comedy about Hollywood absurdities is aided by some great acting talent and a lot of funny in-jokes.

Niccol makes what seems like a preposterous idea not only fresh and entertaining, but most of all reveals said idea to be not at all far removed from reality.

Its all Al Pacino's show in this Twilight Zone cousin wherein a toymaker's creation seems to come to life. I wished they'd've gone a few more steps than they only suggested (for instance, giving Simulation One some recognizable traits from some actresses to complete the illusion instead of the vacuous automaton we get), but Al still gives us a fun enough ride for the money.

Unusual for Al Pacino tot take on such a role of a slightly Comedic fashion, in a film that wasn't really really great. I like the concept of the film and it's obviously not an out of reach techology to perform, but I guess it sums up a lot metaphorically about celebrity and their followers too.

Pacino, film making & computer geekiness. LOOOL at the 5 inch floppy disk used! Havent seen this one in a long time

have always enjoyed the movies that satirise the movie industry to such a startling degree. Two such films that come to mind are Robert Altman's all-star outing, `The Player' and Peter Weir's tour-de-force of directorial skills, `The Truman Show'. `Simone' is the next one in line and matches up to the levels of the former, vaguely similar movies. It is strange how `Simone' is simultaneously highly original and occasionally unoriginal. It recycles elements from those two mentioned films along with the surrealness of movies like `Being John Malkovich'. Luckily, it copies the best elements so the result is a very good one. Of course the concept of digitally creating an actress has never been attempted before (hence the poster quote- `a star is. created'). It may sound highly implausible at first, but it isn't surprising that everyone in the world would believe that `Simone' is real. It skates over the surface of Hollywood hypocrisy but never cuts quite deep enough. Much like `The Truman Show', it is done in the delightfully bizarre style that Australian director Peter Weir created in that picture. The director of this film shows great potential for the future if he follows this up well. The cinematography is top-notch and it is appropriate that Hollywood has an orange glare while a blue-ish shroud of mist surrounds the indoor areas and studios. The script is brilliant, sharp and witty in some parts, but in others, it seems a little patchy to say the least. The predicted interest curve greatly soars in the first 2 parts, but the surrealness sets in towards the third part, and the comedy becomes increasingly sporadic. While it may seem slightly sour in its offbeat way, it leaves a satisfying taste when the credits roll. No one could have done the Viktor Taransky part better than la Pacino himself. He is simply tremendous as the Hollywood producer, and has finally dumped the `hoo-haa' image. It's ironic how Rachel Roberts had to pretend to be digitally created, while her digitised character had to pretend to be a human actress. This is one of the most daring roles in cinematic history and she handles it superbly. Supporting performances deserved some more of the limelight, and it's a shame that they don't get much screen-time. Catherine Keener, Jay Mohr, Jason Schartzmann, Elias Koteas and Winona Ryder (brilliantly parodying herself) do well in their small roles, but still needed a bit more conviction. The movie's greatest powers and occasional flaws lie in the close attention to detail. The visual effects on the computer-generated character are a pleasure to watch and real candy for the eyes. The references to other stars (Sophia Loren, Jodie Foster etc.) are always funny, as is Simone's acceptance speech at the Oscars. It's just a shame that they used fake actresses for the other nominations. The oddest PG movie you will probably ever see, `Simone' is a memorable, exuberant movie experience. I am puzzled by the `hit and miss' reviews it received and how it was ignored at the box-office. This is a great satire on Hollywood.