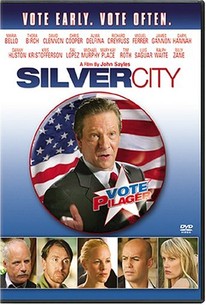 Celebrated writer and director John Sayles turns his eye to politics in America in this drama. The son of respected Colorado politician Senator Jud Pilager (Michael Murphy), Dicky Pilager (Chris Cooper) is a charming but half-bright man with a bad habit of mangling the English language and a decided lack of political correctness. Dicky is also in the midst of a hard-fought campaign to become governor of Colorado. Dicky's campaign manager, Chuck Raven (Richard Dreyfuss), is a ruthless sort who will leave no stone unturned to see that his candidate wins, so when Dicky snags a dead body while fishing during the shooting of a campaign commercial, Raven is determined to find out if his man has been set up. Raven hires Danny O'Brien (Danny Huston), a former journalist turned private investigator, to find out who the dead man is and if he might be connected to Pilager's enemies. But the deeper O'Brien digs into the matter, the more he finds out about the candidate and his family -- and very little of it is flattering. John Sayles assembled a typically impressive cast for Silver City, with the supporting cast highlighted by Tim Roth, Kris Kristofferson, Maria Bello, Thora Birch, Daryl Hannah, Billy Zane, and Mary Kay Place.

Anna Faris is a Centerfold!
Three More Climb Aboard "X-Men 3"

Sayles must have felt the need to weigh in on the last election. But if he was going to do it, a little more planning, writing -- and especially casting -- would have helped.

The plot of Silver City is movieish in the extreme, with filthy abandoned mines subbing for the bars and alleys of urban noir, but it's no more than mild cheese.

Though there's nothing wrong with moral outrage, it doesn't always aid the telling of a complex story. More subtlety might have worked better.

Sayles' prolix narrative, weighed down with subplots and characters and canvassing many social ills, dilutes the impact of a work that should nevertheless still make an impact on thoughtful viewers.

Long, windy, diffuse in its message and blunt in its satire.

Drama is too intense for kids and young teens.

A simple talking, funny-accented greying conservative politician is shown to be a moron.

Too close to reality to be effective as satire.

Cooper does a terrific job, mimicking Bush's speech and mannerisms as well as his tendency to ramble and go off script with hilarious consequences.

Sayles wraps a gripping murder mystery around a rather unsubtle political satire.

Rich Cline
Shadows on the Wall
View All Critic Reviews (128)

There's no doubt that John Sayles has made better films than "Silver City", but that doesn't mean that his film is inferior. No, it has a great deal to offer, such as a top-notch cast, clever writing, and spot-on editing. The film's pacing and inconsistent camerawork may try the patience of some, but there is an engaging story here.

Nice satire and goofy imitation of W moving up in politics.

When watching this film and you see the great Chris Cooper playing a dim-witted politician, you won't be able to help relating it to real life. But this movie goes beyond satirising our incompetent President, it goes beyond just dark humor...it's making a social statement on different levels. The environmental issue is brought up; as well as ethics and corrupt campaign processes, feelings toward undocumented individuals as well as family dysfuntion issues. The great ensemble cast helps bring many different opinions into perspective through different characters who go through different things and are all at different stages of their respective emotional and spiritual breakdowns. At first view, the movie might seem pointless and contrived, but give it a second chance or at least let it sink in for a day or two before you decide that it sucked for you! Daryl Hannah delivers a very understated, yet very fuc&ed-up performance! That's a good thing for her!

"Silver City" starts out badly for Colorado gubernatorial candidate, Dicky Pilager(Chris Cooper) who is a son of a current U.S. Senator(Michael Murphy) and none too bright. While filming a campaign ad, supposedly showing off his fishing skills, Pilager reels in something quite unexpected - a dead body. His chief advisor, Chuck Raven(Richard Dreyfuss), works quickly at damage control and deftly employs an investigator, Danny O'Brien(Danny Huston), and gives him a list of three possible people who would most want to embarrass his candidate. O'Brien who is a disgraced former reporter goes beyond the call of duty by not only interviewing the listed people but also going deeper into the matter of the floating body. One of the strengths of John Sayles' movies in the past is how they have been cast but "Silver City" is seriously lacking in this department. Dreyfus' belicosity(didn't he also do the right-wing thing in "The American President?") and Danny Huston who is not really fit to play the lead seriously hurt the movie. Cooper is wasted playing a one-dimensional character. Of the large cast, Maria Bello playing a reporter/ex of Obrien, James Gammon as a wily sheriff and Daryl Hannah as Pilager's sister come off best. And it's great seeing Tim Roth in anything... "Silver City" is the first John Sayles movie I have been disappointed by.(The only one I have not seen is "Baby It's You.") It's quite similar to other multi-character socially relevant movies that Sayles has made like "Lone Star" and "City of Hope" but this time there is simply too much going on. It might have worked had the campaign been used only as window dressing but the caricatures of Bush and Rove(as personified by Pilager and Raven, respectively) serve as distractions from the main storyline. (Technically I agree with Sayles' politics but I think one has to go beyond simply criticizing the President and his lackey and make positive suggestions as to how the world should be run. Sayles to his credit does concern himself with the environment and how migrant workers are treated. He is also quite cynical of mainstream media and sees potential in how the World Wide Web is used in disseminating news.) Even worse, we never get to see any of the other candidates. Pilager is shown to be a right-wing demagogue but it is never explicitly stated that he is a Republican. Overall, Sayles sacrifices character and story to make a political point in "Silver City". It cannot compare with the infinitely better "Bob Roberts" as an examination of a right-wing political campaign.