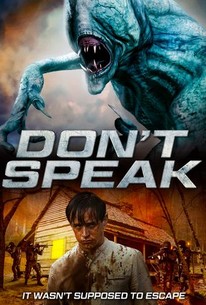 Written and directed by Scott Jeffrey, Silent Place (originally known as Don't Speak in the UK) is a sci-fi horror film about a monster-like creature terrorizing a rural town. When a family decides to visit their grandparents living in the countryside, they find the whole area eerily deserted. The people seem to have left, and no sign of life is evident - until they encounter a different life form that may have caused the humans to disappear. The film stars Ryan Davies, Stephanie Lodge, Jake Watkins, and Will Stanton.

Will Stanton
as Tyler

Nicola Wright
as Mary
View All

There are no critic reviews yet for Silent Place. Keep checking Rotten Tomatoes for updates!

There are no featured reviews for Silent Place at this time.