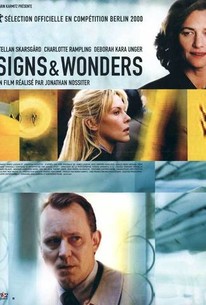 Alec Fenton, an Americanized-European commodities trader is living happily in Athens with Marjorie, his wife, an American of Greek origin who works at the American Embassy. Alec believes in signs and premonitions, which leads him to a torrid affair with Katherine, his beautiful co-worker. His obsessive pursuit of portents results in the slow, torturous unraveling of his seemingly orderly world.

Rampling, to her credit, helps hold the nuthouse together.

Until it devolves into what seems like a quasi-surreal Fatal Attraction ... offers a stark, spooky portrait of family fracture and loss.

Has extraordinary depth and insight about the limitations and follies of human beings.

For all its ambition and richness of style, Signs & Wonders never shows us what's inside Alec.

As a drama about the ravages of mental illness, the movie works.

Signs and Wonders fails because Mr. Nossiter doesn't bother to define the women as characters; he seems as deluded as Alec.

Danger: when your suspense film ends and you don't care who really did "it", whatever "it" is, you might want to rethink the plot.

Abtruse, delicately constructed and thoughtful... an arty Euro-flick with an almost entirely emotional mystery and pay-off.

Feels like a film that could have been shot by Nicolas Roeg.

While it loses its balance deliberating between a political message about American values, a mystery of chance and a steamy love triangle, Signs & Wonders makes for compulsive viewing.

There's a potentially good film struggling to get out of an overly self-conscious director's grip here.

Even though it was critically panned, I can't say that I didn't enjoy this film. There is tremendously good interplay between the leads and heavy good drama.

I like it.As a cult art-house it doesn't fail,trifling and playfully iconoclastic.Greece as a tourist/underground combination.We have a Rambling/Skarsgard clash and to be honest,Katalifos' inspiring performance steals the show.Nossiter moves around like a rat amongst cats' dormitories carrying out his passion for film-making too much I think.