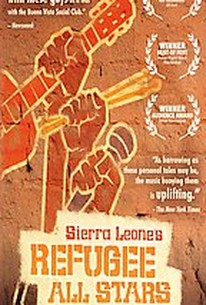 The Refugee All Stars are a band of Sierra Leonean musicians who have been living as refugees in the West African nation of the Republic of Guinea. A brutal, decade long civil war (1991-2002) in Sierra Leone forced the band members from their homes. It took the lives of many of their loved ones and has left them with physical and emotional scars that may never heal. However, what the war could never take from them was their music. Through music The Refugee All Stars have found a place of refuge, a sense of purpose and a source of power. The feature length documentary film THE REFUGEE ALL STARS follows the band over the course of three years as they make their way from the refugee camps back to their homes in the war-ravaged country of Sierra Leone. Amidst the tragedy of recognizing all that has been lost there is also triumph as the band realizes their dream of recording an album of their original songs. Told through the universal language of music, THE REFUGEE ALL STARS reveals a uniquely inspiring and personal story of survival and rebirth in the wake of the horrors of war. As conflicts multiply around the globe, and the worldwide refugee crisis deepens, we believe that this film will provide an important and powerfully humanizing antidote to the surface mass media coverage given to these innocent victims of war. --© Official Site

Right now, Sierra Leone's civil war and its recent history involving the illegal diamond trade are the engines of Blood Diamond. The Refugee All Stars makes a realist, humanist antidote to that movie's many Hollywood trappings.

Niles and White capture the fear in the faces of the band members - but also their energetic fortitude and willingness to move on from their past suffering.

There couldn't be a better example of the healing power of art right now than Sierra Leone's Refugee All Stars, six musicians who fled the horrific civil war, and spent years languishing in refugee camps where they all met and came together to make music.

There are no featured reviews for Sierra Leone's Refugee All-Stars at this time.