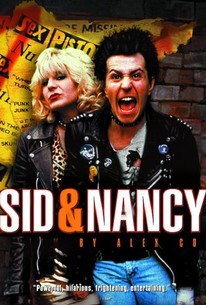 Punk rock's first great embodiment of the motto "live fast and die young," Sid Vicious joined The Sex Pistols when they were already established as the most controversial rock band in British history; and it soon became apparent that he couldn't play his instrument, had a magnetic attraction to chaos, and possessed a dangerous thirst for booze, drugs, and violence. Sid & Nancy opens shortly after Sid (Gary Oldman) joined the band, when he meets an obnoxious American punk groupie named Nancy Spungen (Chloe Webb). Nancy claims that she can get drugs, and Sid naively gives her his money. Nancy doesn't show up with the goods, but when Sid runs into her a few days later, she has a tall tale about getting ripped off - and Sid sympathizes with her. Before long, Sid and Nancy have fallen in love, and while they argue with uncommon vehemence, they also depend completely on each other. When The Sex Pistols break up, Sid has few prospects and an increasingly voracious appetite for heroin, and Nancy's attempts to "manage" his career only hasten his downhill slide. Former Clash leader Joe Strummer wrote the film's theme song, "Love Kills," and The Pogues, The Circle Jerks, and Pray for Rain contributed to the soundtrack. ~ Mark Deming, Rovi

News & Interviews for Sid and Nancy

View All Sid and Nancy News

Critic Reviews for Sid and Nancy

They are more than zombies doing needlepoint on each other's veins. Both are brought to life in complex, deeply felt performances from two actors who have abandoned themselves to enormously demanding and difficult roles.

Every character is booked through to hell or purgatory. But we gasp at the inventiveness, ferocity and cuckoo anarchy with which these rockers prepared their route to destruction or damnation.

Sid & Nancy is an honorable try, but it could have been better had Cox found a way to imbue the movie with some of the sheer zaniness of his Repo Man.

Once we sense a glimmer of talent and accept these people as human beings, the tragedy of their drug use resonates enormously.

This is a love story -- an unlikely, perverse, disturbing love story, but a genuine one.

The film stars Gary Oldman as Sid and Chloe Webb as Nancy, both dialled up to 11 on the acting-ometer, perhaps as manic and irritating as their characters were.

Neil Young may have namedropped Johnny Rotten in "My My, Hey Hey" but it's Vicious he was really singing about.

Sid and Nancy is a fascinating record of a volatile period in music history.

There is some nobility in the film's relentlessness and single-minded focus, but not enough to redeem its lack of having anything much to say beyond what we get on the surface.

Cox doesn't just plot an obvious decline: things do get grim, but he makes you care as you also despair for punk's cracked casualties.

Audience Reviews for Sid and Nancy

Fully invested with all the hormones of youth, drugged up past all rationale, famous and infamous and not giving much of two fucks, this is a love story and a commentary on us. Simply beautiful.

Biopics are always wonderful because we get to see an interesting character brought to life through film. In the case of this film, it is Sid Vicious, the volatile bass player for The Sex Pistols. Gary Oldman is absolutely mesmerizing in the role of Vicious, and he really makes this flawed film worth seeing. I say flawed because according to Johnny Rotten, events in the film didn't happen as such and it is full of inaccuracies. Now I'm not into punk rock and I tend to lead more on Heavy metal music than anything else, so I wouldn't know how accurate the film is. However it definitely is a compelling, well acted drama that belongs on the shelf of the best biopics ever filmed. Oldman is a great actor, and he is perfect in the part. Sid & Nancy is a film that manages to overcome its flaws by its strong performances alone. Whether you like the music or not, this is worth seeing if you love Gary Oldman's work, and with such talent, I'm surprised that he hasn't won an Oscar. This is an overlooked film in his career, as he would take on better roles in future films, nonetheless this is a stunning performance that showcases his talents as an actor at such an early phase in career. Directed by Alex Cross, Sid & Nancy is a film that should be seen by any cinema buff looking for a well acted biopic about an interesting musical icon and his volatile, drug induced life and his short term stint with The Sex Pistols.

An amazing ride through the short life of the Sex Pistols and Sid Vicious featuring Gary Oldman in one of the best performances I've seen.