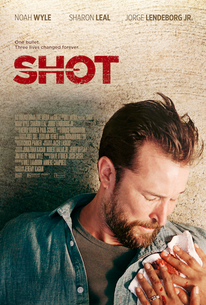 SHOT begins as sound mixer Mark Newman (Wyle), is pumping up the volume on a bloody shootout scene in an action film. Hours later, after an argument with his wife Phoebe (Leal), Mark is suddenly felled by a real random bullet, and lies bleeding on the pavement with a chest wound. With Phoebe desperately trying to stop the bleeding, they both agonizingly wait for an ambulance to arrive as Mark fights for his life. Meanwhile, hidden behind a fence across the street, a teenager, Miguel (Lendeborg), watches in horror with the still smoking gun in his hand. A gun that was just handed to him by his cousin and meant to protect him against gang bullies. From the moment the shot rings out, Kagan's camera in real time daringly follows Mark from the street, to stretcher, to gurney, to examining table, as we watch the paramedics and medical teams in full life-saving mode. Through the imaginative use of split-screen, Kagan juxtaposes Mark's medical crisis with Miguel's moral one, as we simultaneously see the frightened young man wrestle with the fact that an innocent man was injured - or worse - as a direct result of his actions.

Kingsman: The Golden Circle Is a Flat Follow-Up

Wyle is so good as he goes through the stages of pain, rage, remorse and resignation that he keeps you caring and alert.

2nd Amendment advocates arming themselves against a Hollywood screed will be relieved that the film avoids political activism to focus on trauma and recovery.

Shot certainly has a message, and implies villainy in the universe, but its story is about innocents.

"Shot" would have you believe there's a moral to this fable. But suggesting that the solution to the problem of gun violence is as simple as one of Aesop's fables only adds insult to injury.

It's the fine acting and the film's plea for sensible gun control that carry the day.

The characters deal with guilt, disability, and trauma, culminating in an intense final confrontation...and an underlying whiff of a Very Special Episode.

... it's an effective film with plenty of talent behind and in front of the camera.

...engrossing and sympathetically realized. However, Shot needed to embrace the gun control pulpit more fully than only scratching its surface and playing it sentimentally safe.

Using acute, penetrating realism, a career-best performance from Wyle, air-tight writing incorporating pressing themes, and an unpredictable ending that will leave you speechless, Shot overwhelmingly succeeds as a film and a statement about our culture.

This may be a gimmicky exploration of gun violence, which sometimes feels like a preachy public service advisory, but its story unfolds with raw power.

Shot is not sophisticated, but it is truthful, which is, after all, the basis of most clichés.

Noah Wyle's vivid performance as a victim of random gun violence anchors one side of a split-screen drama that's only half good.

There are no featured audience reviews yet. Click the link below to see what others say about Shot!