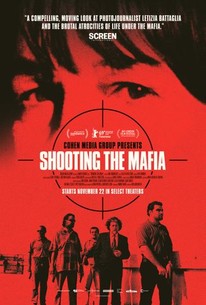 Critics Consensus: It may not peer as closely or inquisitively as it could have, but Shooting the Mafia pays affectionate tribute to an important -- and fascinating -- subject.

Critics Consensus: It may not peer as closely or inquisitively as it could have, but Shooting the Mafia pays affectionate tribute to an important -- and fascinating -- subject.

Critic Consensus: It may not peer as closely or inquisitively as it could have, but Shooting the Mafia pays affectionate tribute to an important -- and fascinating -- subject.

Sicilian photographer Letizia Battaglia began a lifelong battle with the Mafia when she first dared to point her camera at a brutally slain victim. A woman whose passions led her to abandon traditional family life and become a photojournalist in the 1970s--the first female photographer to be employed by an Italian daily newspaper--Battaglia found herself on the front lines during one of the bloodiest chapters in Italy's recent history. She fearlessly and artfully captured everyday Sicilian life--from weddings and funerals to the grisly murders of ordinary citizens--to tell the narrative of how the community she loved in her native Palermo was forced into silence by the Cosa Nostra. Weaving together Battaglia's striking black-and-white photographs, rare archival footage, classic Italian films, and the now 84-year-old's own memories, Shooting the Mafia paints a portrait of a remarkable woman whose whose bravery and defiance helped expose the Mafia's brutal crimes.

News & Interviews for Shooting the Mafia

View All Shooting the Mafia News

Critic Reviews for Shooting the Mafia

There's a fascinating movie about the Sicilian mafia sitting somewhere inside this patchwork documentary portrait of the veteran Italian photographer Letizia Battaglia.

Initially feels like something a bit different for the director, but the subject matter is fascinating.

The unfocused yet still engaging documentary "Shooting the Mafia" is a compelling curiosity.

You'll come out of the film knowing as much about the Sicilian Mafia - maybe more - than the photographer who made her name shooting it.

This candid and passionate documentary portrait, directed by Kim Longinotto, shows that Battaglia has always lived at the turbulent crossroads of history.

Shooting the Mafia is a very interesting and fast documentary. [Full Review in Spanish]

"Spends far too much time on her subject's colorful love life and not enough on her inspiring career. "

Director Kim Longinotto's portrait of the red-haired, chain-smoking photographer [Letizia] Battaglia... is a vivid documentary description of a very specific time and place.

An affectionate portrait of a remarkable woman that loses its grip when it bites off more than it can chew.

[T]he film doesn't provide much sense of the part it has played in transforming attitudes in Battaglia's home town of Palermo.

Director Kim Longinotto and Westport-based producer Niamh Fagan's film is unflinching and it crackles with anger but it also finds great reservoirs of humanity among these deeply personal stories of loss and pain.

There are no featured reviews for Shooting the Mafia at this time.