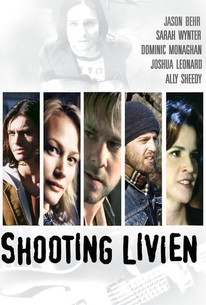 An aspiring musician on the brink of stardom attempts to do battle with his personal demons before they finally get the best of him in an emotional musical drama from filmmaker Rebecca Cook. John Livien (Jason Behr) is a struggling New York City rocker who, along with band-mates Owen (Dominic Monaghan) and Robby (Joshua Leonard) sense that they are onto something big. Though Livien's devoted girlfriend Emi (Sarah Wynter) and hard working manager Brea Ally Sheedy do their best to support the band and provide the volatile singer with a comfortable environment in which to create, the prospect of standing face-to-face with his own worst inner fears may be enough to drive the increasingly unstable Livien to the point of no return.

Carolina Hoyos
as Herself

A hypnotic portrait of an almost-famous artist, Shooting Livien is alert to how creation and self-destruction go hand in glove.

When the worst you can say about a director is she tried too hard... chances are you're talking about someone who will one day... blow audiences away.

There are no featured audience reviews yet. Click the link below to see what others say about Shooting Livien!