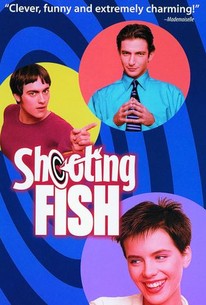 As con men, Dylan and Jez are the perfect complimentary pair. An American with an uncanny feel for numbers, handsome Dylan (Dan Futterman) is the smooth talker, while the introverted, dweeby Brit Jez (Stuart Townsend) is a computer genius. Their latest scam involves a computer supposedly capable of recognizing voices. To help them, they hire pretty secretary Georgie (Kate Beckinsale). A highly intelligent medical student, Georgie quickly figures out her bosses' game, but she has trouble of her own because she is being forced to marry an idiotic aristocrat. It doesn't take long for her to befriend the two grifters. This fast-paced romantic comedy follows the sly exploits of the newly formed trio, who have a knack for extricating themselves from dangerous situations by the narrowest margins.

Barry Woolgar
as Friend of Lady Georgina
View All

The chemistry between the leads is undeniable

Dan Futterman, Stuart Townsend and, especially, Kate Beckinsale have enough charisma for this film and a sequel or two.

A fast-paced English comedy that sparkles thanks to the performance of Kate Beckinsale.

A diabolically clever caper film that moves at a whiz-bang pace.