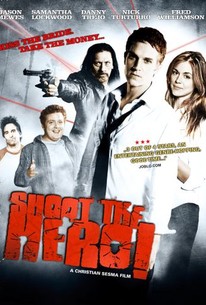 A young couple (Jason Mewes and Samantha Lockwood) shopping for wedding rings witnesses a jewel heist gone awry, and becomes the target of a vicious mob boss (Danny Trejo) who's determined not to leave any witnesses. Meanwhile, two brothers (Nic Nac Nicotera and Mike Hatton) are forced to hitch a ride to work after getting stranded on the road, and find themselves hopelessly drawn into the fiasco when they accept a ride from the fleeing couple. Fred Williamson and Nick Turturro co-star.

Fred Williamson
as The General

Annemarie Pazmino
as Chinadoll
View All

Critic Reviews for Shoot the Hero

There are no critic reviews yet for Shoot the Hero. Keep checking Rotten Tomatoes for updates!

Audience Reviews for Shoot the Hero

"The movie is dumb, silly, and sometimes funny. I don't know why people waste their time making these types of films. But here is a good example of a shitty film that has shitty acting and was a waste of money that could have went towards a decent film. Waste of my time, their time and film. Move along. Nothing to see here."

When Nate (Jason Mewes) and Kate (Samantha Lockwood) go into a jewelery store to buy a ring all hell breaks loose in a confusing and dull film that I can only describe as what happens when morons try to make Pulp Fiction. This movie clocks in at a little over 80 minutes. 80 minutes is the length for a film to officially be considered a feature. Watching the movie you can see where they padded to push that extra fifteen seconds out to make a full length film. The bad part about it is that it feels like 180 minutes. It's a mish mash mosh of nothing that falls on its face in the first few minutes. This movie is bad. bad, bad, bad, bad, bad. With a capital B.