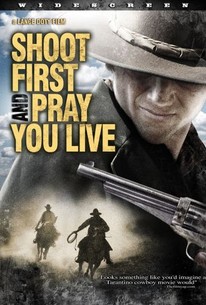 His father shot down by the quickest draw in the west, a man sets out for vengeance and finds himself riding with a notorious band of cut-throats who never back down from a good gunfight. Upon learning that his father has been fatally wounded by trigger-happy bandit Bob McGurk, Red Pierre leaves his Mexican monastery to ensure that justice is served. On his way to confronting McGurk, Pierre falls in with Jim Boone and the Cut-Throats. Having recently lost a son, gang-leader Boone brings Pierre into the fold against the wishes of his outlaw underlings. Later, Pierre catches up with McGurk and gets the upper hand in the showdown. But despite being wounded McGurk isn't not dead yet, and until he is, Pierre's father won't be avenged.

There are no critic reviews yet for Shoot First and Pray You Live (Because Luck Has Nothing to Do with It). Keep checking Rotten Tomatoes for updates!

There are no featured audience reviews yet. Click the link below to see what others say about Shoot First and Pray You Live (Because Luck Has Nothing to Do with It)!