Shock to the System: A Donald Strachey Mystery (2006) 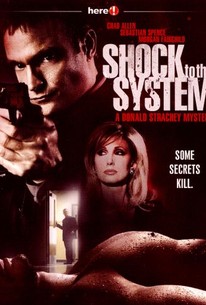 The traditional crime thriller gets a modern twist with this sequel to Third Man Out following the further adventures of gay detective Donald Strachey (Chad Allen). Hard boiled private investigator Donald Strachey has just found the lifeless body of his latest client, and now in order to catch the killer he'll be forced to rely on his straight-laced husband Tim and overenthusiastic assistant Kenny. As the investigation leads Strachey straight into Dr. Trevor Cornell's dark world of "conversion therapy,' where psychology and religion combine with the singular goal of turning average everyday homosexuals "straight," the stage is set for a climactic showdown with more than a few surprising twists and turns. Sebastian Spence and Morgan Fairchild co-star in an adaptation of author Richard Stevenson's best-selling series of books that will have viewers of all sexual pursuasions on the edge of their seats.

Robert Kaiser
as Tobias
View All

Critic Reviews for Shock to the System: A Donald Strachey Mystery

While the idea would certainly seem to hold promise for interesting social commentary, the script by Ron McGee lacks the necessary bite, as does the rote direction of Ron Oliver.

This is a sly, refreshingly grown-up gay entertainment, though rather less satisfying as a thriller.

Where film noir is often punch-drunk with a jab of snappy patter and a left hook of world-weary cynicism, Shock tries to clinch with understanding.

... director Ron Oliver applies a thin veneer of straight-to-cable pseudo-gloss without finding a workable tone, and the cast lacks the charisma and chemistry to make the genre and gender-bending register as more than novelty.

It's certainly a pleasant enough way to kill 90 minutes.

Were it not for the fact that the hero and many of the major supporting characters are gay... this breezy, disposable film could as easily have been a mainstream network pilot for a McMillan and Wife-style series.

Pity there was no room for Phyllis Diller or Carol Channing here, because then the film might have had a leg up on Scooby-Doo and the Creepy Castle.

Audience Reviews for Shock to the System: A Donald Strachey Mystery

There are no featured audience reviews yet. Click the link below to see what others say about Shock to the System: A Donald Strachey Mystery!

Shock to the System: A Donald Strachey Mystery Quotes