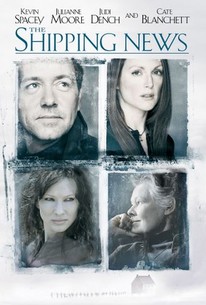 Critics Consensus: Though solidly made and acted, The Shipping News is rather heavy-handed and dull, especially given the nature of its protagonist.

Critics Consensus: Though solidly made and acted, The Shipping News is rather heavy-handed and dull, especially given the nature of its protagonist.

Critic Consensus: Though solidly made and acted, The Shipping News is rather heavy-handed and dull, especially given the nature of its protagonist.

A man makes a journey to self-discovery when he returns to his ancestral home on the coast of Newfoundland. After the death of his estranged wife, Quoyle's fortunes begin to change when his long lost Aunt Agnis convinces him to head north with his daughters. He relocates to the small coastal village of Killick-Claw. Now, in a place where life is as rough as the weather and secrets are as vast as the ocean, Quoyle lands a job as a reporter for the local newspaper. He reports on the shipping news as he simultaneously attempts to adjust to his new life and surroundings. In the course of his new career, he confronts private demons, discovers dark family mysteries and finds love with a lonely single mother who has a secret of her own.

Will MCallister
as Herry Prowse

News & Interviews for The Shipping News

View All The Shipping News News

Critic Reviews for The Shipping News

I am baffled by all the negativity surrounding it, and I am prepared to designate it as the most underrated film of 2001.

Just as staple foods can sometimes be enjoyable, so this easy-to-digest, gently amusing drama is a pleasant way to fritter away a couple of hours.

The movie has a modest but true feeling for the ways in which people are formed by the ravages of their natural surroundings.

Spacey brilliantly shows Quoyle's transformation from a passive clod to a curious journalist.

I like good newspaper movies. Most of them get it completely wrong. In this case, it's exactly right.

Some novels need to be left alone. Hear that, Hollywood?

But despite sensitivity to the myriad ways personal history shapes us, the film often feels as emotionally constrained and rigid as the Quoyle house lashed to the hill.

Spacey is terrific at playing monsters... As Quoyle stumbles through the Newfoundland scenery with a look of dumb, wounded decency that's as annoying as it is unpersuasive, his eyes let us know that he's smarter than the guy he's playing.

Not really meant for kids and teens.

What has happened to Lasse Hallstrom: This poor adaptation of an interesting novel is not only bland but also poorly acted and shapeless

...a problematic film redeemed by its steel gray palette and the actorly instincts of its chief players

Audience Reviews for The Shipping News

A congenital looser named Quoyle, after having dealt with multiple blows in life, moves with his daughter to his ancestral homeland, Newfoundland, at the urging of his long-lost Aunt, Agnis (Judi Dench). There he befriends a serene single mother, Wavey Prowse(Julianne Moore) and gradually finds himself accepted into that remote community. Once the story makes the transition to the snowy coasts of Newfoundland, I found myself elevated to a whole another level of movie experience. Maybe it has to do something with the going-back-to-roots premise of the movie. Photographic grandeur of the breathtaking landscapes plays its part in that feeling too. Movie features powerful performances from a clutch of well recognized talents. The simple story can basically be described as one about our search for a place in the world and about coming to grips with the past. Lass Hallstrom, who gave us "What's eating Gilbert Grape", leaves you with a similar experience when you're through with this movie.

Not a Corvette this film but rather a stationwagon with room for many (and their assorted baggage) and not a film for everyone, this story of a family returning to it's small town roots I found hypnotic. It's my favorite Spacey film, instantly, Dench was solid as an oak, and Julianna Moore did not offend me for a change.

An interesting family movie - with all sorts of A list stars. Kevin Spacey plays Quoyle, who starts his live over after he goes back to his ancestral home in Newfoundland. I liked the acting by Quoyle's daughter who is played by three sisters (at different ages I presume). I also liked the set - the stark Newfoundland seashore.

Cast: Kevin Spacey, Julianne Moore, Judi Dench, Cate Blanchett, Pete Postlethwaite, Scott Glenn, Rhys Ifans, Gordon Pinsent, Jason Behr, Larry Pine Director: Lasse Hallström Summary: Distraught after the disappearance of his estranged wife, Quoyle (Kevin Spacey) and his daughter move into their ancestral home with his long-lost aunt (Judi Dench) in Newfoundland, where life is rough and secrets are buried deep. When Quoyle lands a job as a reporter for the local newspaper, a past emerges, a mystery unfolds and life awakens. Lasse Hallström directs this drama based on the Pulitzer Prize-winning novel by E. Annie Proulx. My Thoughts: "Such a great story. Kevin Spacey delivers another flawless performance. He is a favorite of mine and he never disappoints in any film he does. His character Quoyle, in the beginning seemed very naive and to be honest, pathetic. Though his new life in Newfoundland brings with it a fresh start, and you slowly see his demeanor change. He becomes confident and strong in the sense of him finally finding himself. The story itself is a bit depressing in the beginning, but the mood changes throughout the film . The tale is sad, but the ending is satisfying. I liked the symbolism of the house. Just a great story with a great cast. Love Judi Dench. See it if you haven't."