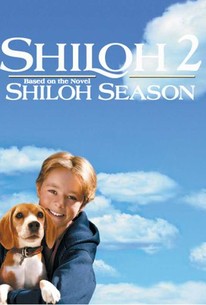 The adventures of a boy and his beagle continue in this sequel to 1997's Shiloh. Marty Preston (Zachary Browne, replacing Blake Heron, who played the role in the first film) is a well-meaning 12-year-old who adopts Shiloh, a beagle who was treated cruelly by his first master, a bitter alcoholic named Judd (Scott Wilson). However, when Judd is hurt in an auto accident, Marty realizes Judd may have lost one of the only friends he had, even if he did mistreat Shiloh. With help from his parents (Michael Moriarty and Ann Dowd), Marty tries to help Judd get back on his feet both physically and emotionally. Rod Steiger also joins the cast returning from the first film as the crusty but lovable Doc Wallace.

Eddie Mathers
as Rescuer No. 1

Mark Vasconcellos
as Rescuer No. 2
View All

Shiloh 2: Shiloh Season recycles the same characters and in a way the same problems as the wonderful original film, but carries the message a little further.

This is a big hug of a movie.

The endearing characters and likable performances make all the wholesome life lessons easy to swallow.

A fine family drama about the difficulty of reaching out to individuals who have closed off from others.

When all is said and done, it's just another weak attempt at good family entertainment.

A carbon-copy of most other 'dog & boy' movies.

There are no featured audience reviews yet. Click the link below to see what others say about Shiloh 2: Shiloh Season!