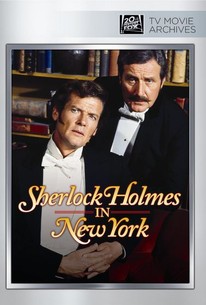 Sherlock Holmes in New York is a topnotch TV movie starring Roger Moore (surprisingly effective as Holmes) and Patrick MacNee (an intelligent, compassionate Watson). The Great Detective travels to the Big Apple of the 1890s to thwart arch-villain Moriarty, who plans to devalue the world's gold supply. Holmes is also reunited with his lost love Irene Adler (Charlotte Rampling), whose honesty--or lack of it--is just as much in doubt as it had been in Doyle's Scandal in Bohemia. The film combines the razor-sharp deductions of Holmes with the deeper, darker aspects of his character. Sherlock Holmes in New York underwent numerous script and concept changes while the producers awaited the availability of Roger Moore, who in the mid-1970s was being kept busy as James Bond.

There are no featured reviews for Sherlock Holmes in New York at this time.